2019 was a deadly year for Italian philosophy. In few months died five outstanding scholars, who were born from 1929 to 1938: Tullio Gregory (professor in Rom «La Sapienza»), Ettore Casari (Florence and Pisa), Carlo Augusto Viano (Turin), Emanuele Severino (Catholic University in Milan, and Venice), Remo Bodei (Pisa). The paper presents a picture of the different personality of those scholars and of their contribution to the development of the philosophical debate in Italy. Gregory was close, in his youth, to the religious ‘modernism’ of Ernesto Buonaiuti and studied medieval Platonism and French libertinism; Casari worked on the philosophy of science and the modern logic; Viano grew in the milieu of the ‘new Enlightenment’ of Nicola Abbagnano and Norberto Bobbio; Severino started from the catholic ‘scholastics’ and approached a ‘theory of the being’ that reflected a Heideggerian inspiration; Bodei started from Hegel and German ‘classic philosophy’. All these scholars grew and belonged to the post-idealistic season of Italian philosophy. The paper offers an outline of the transition from Croce’s and Gentile’s Idealism to the Italian post-war philosophy, and of the changing panorama of Italian philosophy in the educational ‘curriculum’ of the post-war generations. It outlines the growing relationship of these young scholars to their foreign colleagues, and the process of ‘specialization’ of their studies (above all in the field of history of philosophy, but also in the philosophy of science, logic, and political philosophy). Indeed, in the second half of the 20th century the professional role of philosophy changed: the connection with the teaching of history in high school programs – introduced by Gentile’s Reform in 1923 – became weaker, and Italian teachers of philosophy searched new connections with other fields of research, above all with social sciences. The outcome was a growing in specialization, and also in the ‘professionalization’ of the philosophical research – a professionalization no longer functional to the high school teaching. The main division line among scholars was no longer the different theoretical position, but rather the different field of inquiry. In the last decades ‘professional’ philosophy, i.e. philosophy taught in schools or universities, was no more the ‘unique’ philosophy. Thus, philosophy found an increasing presence in newspapers, in television programs, in festivals; philosophical questions became a subject for mass media. 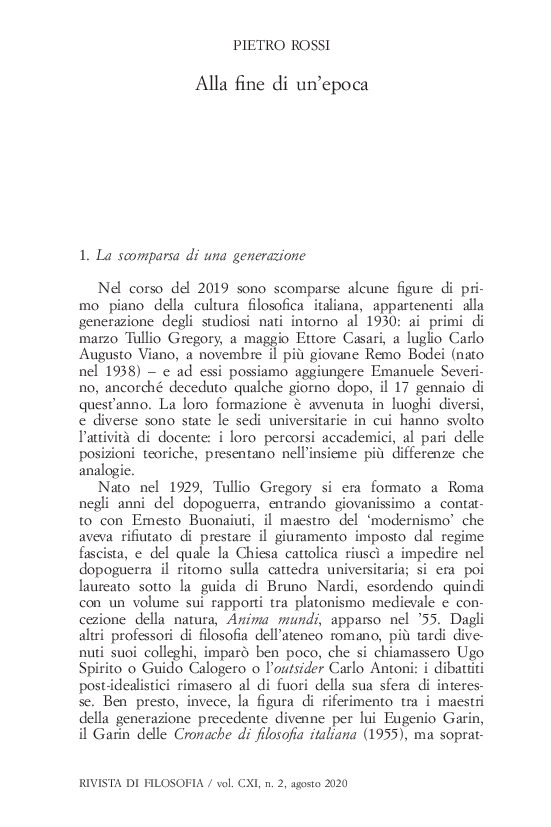