It is frequently assumed that one can speak of «Italian philosophy» only from the Renaissance onwards. This paper first shows that this well-received view was established by Giovanni Gentile and Eugenio Garin. The latter refused not only the Eighteenth-century myth of «ancient Italian wisdom», but also the claim of a few early Twentieth-century scholars that the beginnings of «Italian philosophy » should be traced back to the Middle Ages. Though acknowledging the weaknesses of such arguments, this paper shows that a «specific» Italian philosophical culture did exist during the later Middle Ages. Because of the peculiar institutional structure of Italian universities, philosophy was not conceived as the «handmaid» of theology but as a «sister» of medicine; Italian Arts masters had a higher social status than their European colleagues; they enjoyed greater intellectual freedom, and focused on disciplines such as logic, psychology, natural philosophy and astronomy. Moreover, this paper argues that the commonly accepted idea that «Italian philosophy » began with the Renaissance should be better qualified by emphasizing that only from the 1540s a few Italian intellectuals, who believed that the volgare was worthy to be used as a language of scholars, started to systematically publish philosophical works which were written in Italian, and were explicitly destined to an Italian readership. 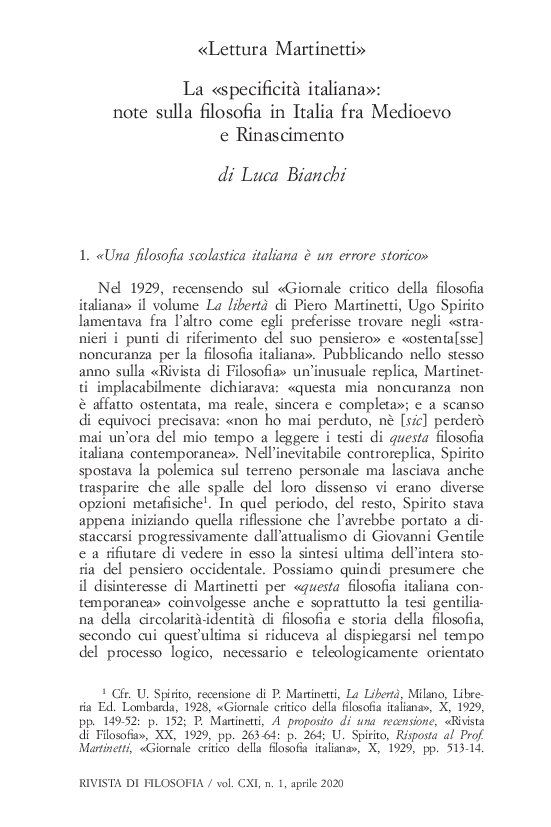