The article aims at demonstrating the problematic character of the notion of "human sciences" and the difficulty both of their demarcation from natural sciences and their distinction from social sciences (whose subject matter is not restricted to human societies). At the beginning - 18th century - the sciences of man and human society were not opposite to the natural sciences; on the contrary, they assumed these sciences as a model, trying to follow the same approach and to achieve the same degree of certitude. Only the German historical school put forward the idea of a categorial difference between two forms of knowledge, one having as obejct the physical or chemical or biological phenomena, the other the human world. The article considers the various formulations of this dichotomy, from the distinction between sciences of nature and sciences of mind ("Geisteswissenschaften") by Wilhelm Dilthey to the distinction between nomothetic and idiographic sciences by Wilhelm Windelband, from the different definitions of the sciences of culture by Heinrich Rickert and Ernst Cassirer (and the conception of culture by Helmuth Plessner or Arnold Gehlen) to the recovery of causal explanation and typological concepts in the social sciences by Max Weber. The author's conclusion is that these attempts at individuating human sciences as a distinct kind of discipline are based on a dualistic epistemology, which is as unreliable as a monistic one, deriving from the positivistic tradition. Scientific knowledge cannot be reduced either to a single model or to two antagonistic models, but must be analysed according to the range of their methods and with reference to the relations between such methods and the different research fields. 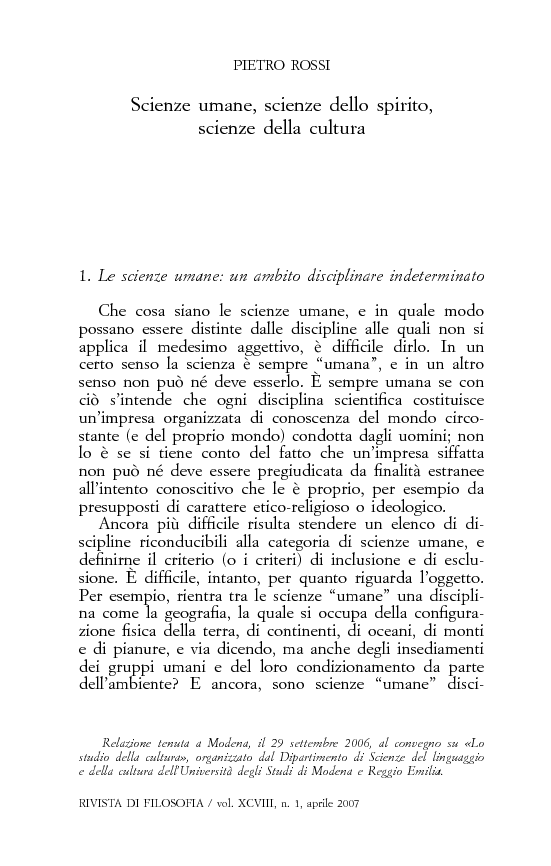