XVI century Japan ended a long period of transition: finally a new and stable institutional framework emerged under the Tokugawa "shogun". For a very long time the Imperial court, confined in Kyoto, had played an almost symbolic rule, while the power was in the hands of military governments (bakufu). However bakufu were increasingly unable to control local developments and in the provinces a new class of powerful landlords ("daimyo") was gaining autonomy in military, judicial, administrative and economic matters. The system of property rights and income distribution played a central role in shaping the new social and economic structure. For many centuries, this system kept in balance central and local powers. Its flexibility was the reason of both the growth of economic activities and the loss of importance of the central apparatus of fiscal government. Property rights and rents' entitlements were split and became tradable economic goods among an increasing number of intermediaries in rural economics. Land productivity was raised by technological innovation; the development of non-rural activities - such as trading, transport, handicraft, exploitation of natural resources - laid the way to capital accumulation and the creation of markets for goods and financial activities. Japan began to trade with Western countries. "Daimyo" were well aware of the importance of economics in the struggle to strengthen their local power and their contractual strength versus the central government. The under-taking of new economic initiatives was on the agenda of many forward-looking "daimyo": fiscal reforms, trade development, currency and exchange rate regulation, control of powerful trade and handicraft associations, financial management of fiefs. However, many initiatives proved to be unsustainable and inefficient: constrained by structural impediments, institutional confusion and military urgencies, "daimyo" had to pursue many targets, often incompatible. It was only after political unification that Tokugawa shogun succeeded in striking a new balance between local and central powers and to reach a real governance of economic activities. 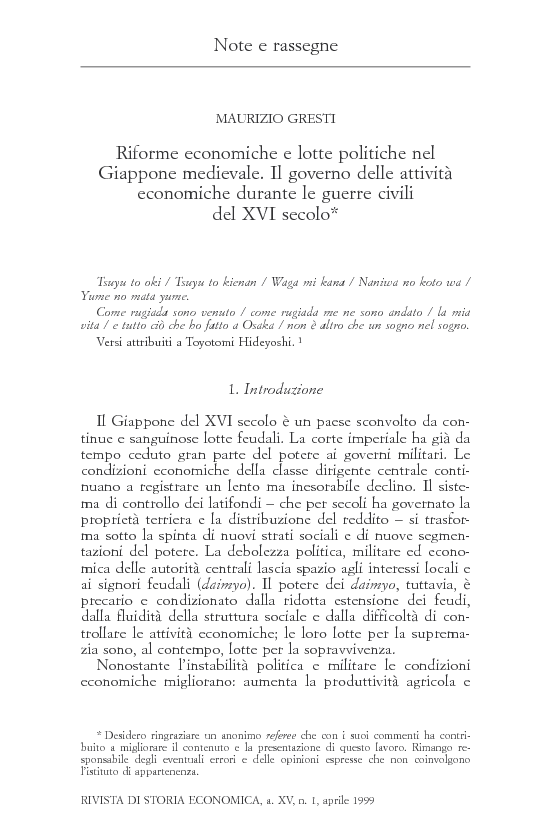