This essay deals with the market for electrical power in Puglia, Southern Italy, between 1925 and 1945. Using a regional and micro-analytical perspective, the author focuses on critical issue of the relationship between the economic development and the energetic infrastructure, in order to frame this particular case-study into the national pattern of the energetic market. The article is based on the corporate data of the SGPE. As in the whole Western society, managerial capitalism and big scale business were the two main factors which characterised the history of electrification in Puglia. From this point of view the article aims at understanding the role played by a big enterprise, operating in a public utility sector, such as SGPE, in shaping and affecting the regional economic performance. In the three sections which compose the article, the author analyses: 1) the electricity supply in Puglia before SGPE (1892-1925); 2) the building of a "regional power system" (1925-1938); 3) the use of electricity and its relationship with the emergence of industrialisation in Puglia. In particular, the article analyses the managerial and commercial strategies of SGPE in order to stimulate the household, industrial and agricultural demand for electric power. The analysis of these strategies has led to some interesting results. First of all it emerges that the SGPE, thanks to special rate policies, succeeded in increasing the energetic demand in particular in the industrial sector; secondly it exploited the institutional advantage of being a big enterprise, which had the monopoly of supply in that area and operated in a public sector, to pursue a precise and elaborate business strategy. The SGPE aimed at the same time at the growth of the industrial sector and the increase of the electrical consumption. The SGPE pursued these two goals by setting much higher rates for households than for industrial consumers. These rates helped the regional productive sector, making on the other side the private use very expensive for most of the families. That, more or less open to criticism, was a conscious choice of the SGPE management. Due to its successful strategies, the SGPE was able to affect both the economic policy and the path of industrialisation in Puglia. 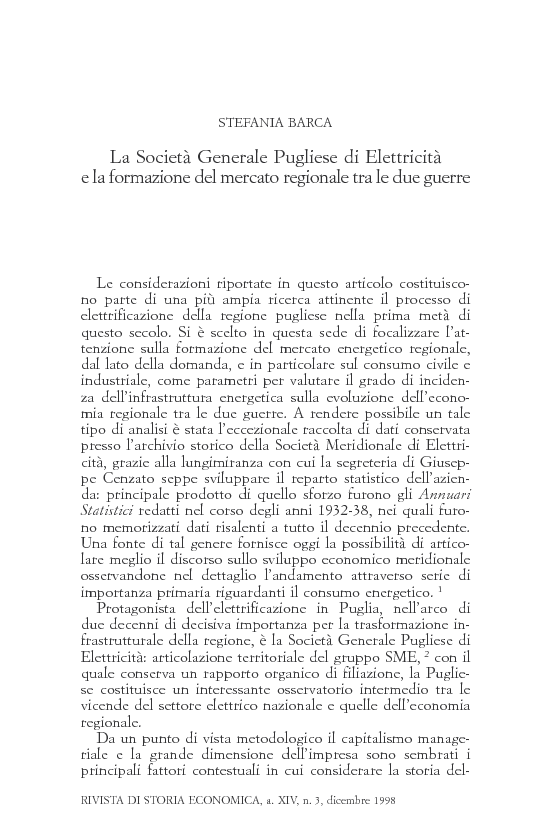