For centuries the problem of food supply engaged many political and intellectual efforts, placing under severe strain the bureaucratic apparatuses and organisational capacities of European states. The actual importance of the problem has aroused the interest of historians and economists, prompting them to debate at length the role of the presence, and of any shortage, of grain in the market, and to interpret these historical situations through their theoretical constructions. Based on these foundations, a reassessment of what happened in some European states and their capitals (representing their main marketplaces) in a pre-industrial stage has been started. In the light of the described phenomena it can be seen that famines were not independent of the development of grain policies; from this point of view, any falls in production levels constituted only one aspect, and perhaps not the most important, of the conditions that determined them. It is paramount to take into account the power structures existing within a state as well as their ability, or lack of it, to guide the economy in general and the agricultural sector in particular. But the emphasis placed by traditional thinking on the role of the Victualling Boards as an answer to production problems is lacking in depth. In fact, an examination of the three areas under review (London, Paris and Rome) reveals the existence of a close relationship between agricultural efficiency and economic policy, both capable of affecting the forms and levels of famines. Therefore, observing the role of the pre-industrial State with respect to the distribution of food provisions and the preservation of the citizens' purchasing power, it can be noticed how the economic policy of England in this field pursued mainly a more efficient distribution, how that of France tried to strike a balance between the two strategies while that of the papal State chose the entitlement system, which was maintained, however, to the detriment of the proper working of the economic system. 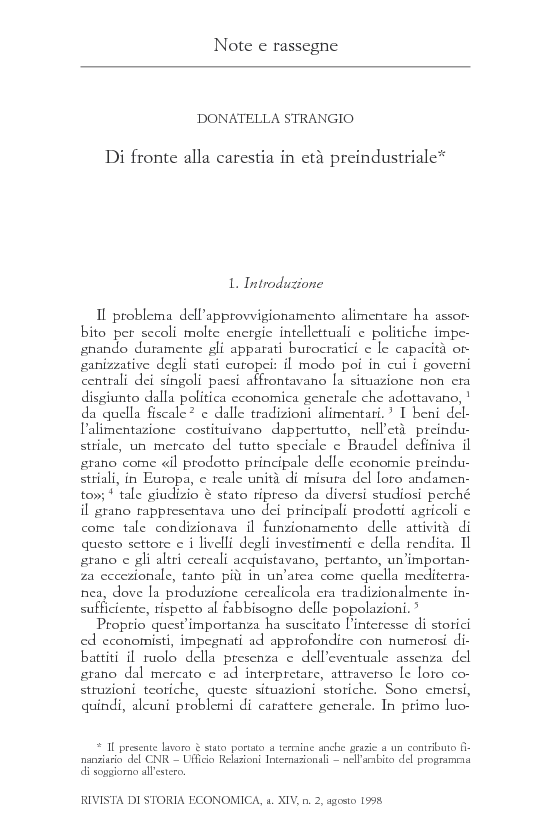