The paper reconstructs the teaching and research activities of scholars in statistics and related subjects at the University of Padua from the Restoration to the Second World War. The history of statistics in Padua is an interesting case study, as it sheds light on the evolution of the discipline at the national level as well as on its relationships with the international development of statistical methods. Some fascinating antecedents go back to the 16th century, with contributions by Gerolamo Cardano and Galileo Galilei. The 150 years from the Restoration to the 1960s are marked by a sequence of phases of renewal and conservatism. At the beginning, the old Statistik took the place of political arithmetic. Statistics experienced telling improvements only with Angelo Messedaglia, who drew from Quetelet and outlined a new political role for the discipline. This led his pupils to view statistics as a social science supporting State intervention, without any methodological peculiarity. A new phase of dramatic innovation was led by Corrado Gini from 1913 to 1925. Again, his pupils and successors exacerbated the neo-descriptive approach of the «Italian school of Statistics», the confrontation with modern statistical inference, and the support to the corporatist programme of the Fascism. This stand largely motivated the post-War decline of the discipline. A new revival had to await the mid-1950s, when Albino Uggé and then Bernardo Colombo started assembling a group of young scholars and planned the establishment of a Faculty of Statistics, achieved in 1968. 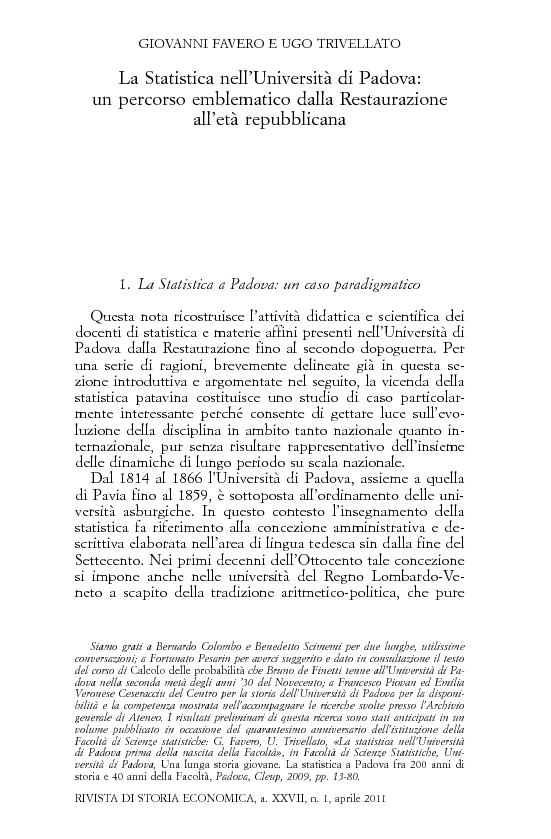