This article analyses the structure of the payments made in a village of the Venetian mainland between 1467 and 1500. First, the relative weight of in-cash and in-kind payments, both used to discharge land rents and debts fixed in money of account, is measured. These proportions changed during that period, a feature which is then interpreted with reference to the Venetian monetary reform of 1472: by substituting in-kind for in-cash payments, peasants were able to reduce total payments only to a little extent, in spite of the considerable reduction of the stock of money. What emerges, is not an opposition between a "natural" and a "money" economy, but a coherent economic structure, where the money of account had the function of measure of value. Moreover, in-kind payments were evaluated according to market prices, that is to say, prices which were fixed in transactions where coins were normally used. Thus, far from being two opposite classes of "money", money of account and coins were strictly connected, not only in the general architecture of monetary systems, but also in the process of fixing the value, and therefore the quantity, of exchanged goods and services. These conclusions suggest that, for a right understanding of the function played by money in early-modern economies, its velocity of circulation should be calculated by comparing the stock of money not only with those transactions which were actually settled in cash, but rather with all those transactions which were settled through the application of monetary values (as economists do for today's market economies). Indeed, this measure of the velocity of circulation of money embodies the effect of higher or lower in-kind payments. Their increase in the fifteenth-century case previously examined - an increase which made it possible to keep total payments relatively constant, in spite of a reduction in the stock of money - can be interpreted as an increase of the velocity of circulation of money. Finally, this relation between increasing in-kind payments, and increasing velocity of circulation of money, has been singled out as a mechanism which may have been at work during the following century's price revolution. This interpretation, while not excluding the effect of the progress of commercial and financial techniques on the velocity of circulation of money, refers to practices strengthened over the centuries. It is reasonable to think that the majority of the population resorted to these practices when, in the sixteenth century, the rise of prices and of the volume of exchanges, not counterbalanced by a proportional increase in the stock of money, made more difficult to pay in cash. 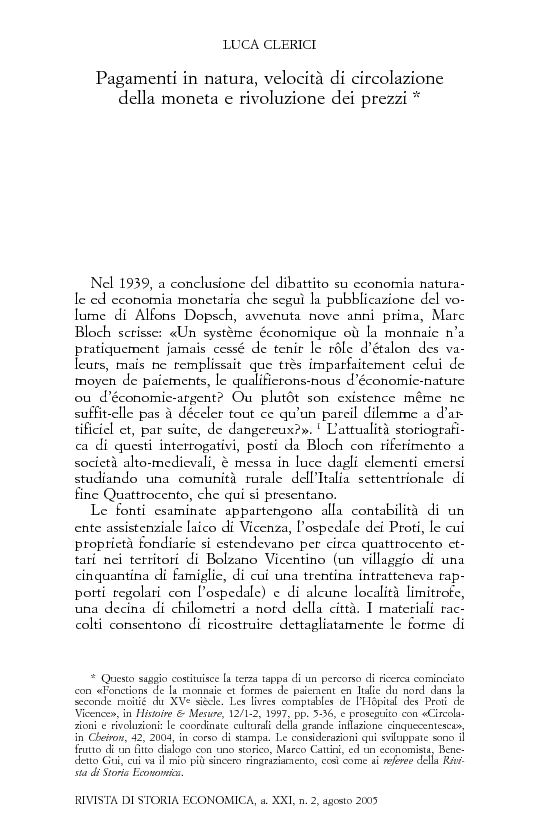