In the late fourteenth and fifteenth centuries, friendship played a central role in the commercial and private correspondence of the Florentines. This phenomenon has attracted the attention of many historians who have mostly interpreted it through the prism of patronage. While their attention has mainly focused on the Medici period, this article takes into consideration the previous phase which includes the second half of the fourteenth century and the first two decades of the fifteenth. It tries to demonstrate that the relationship model that anthropologists call instrumental friendship, and some historians prefer to call – opting for less evaluative implications – formal friendship, is better suited to understand the relationships between late fourteenth-century Florentines. The replacement of the patronage model with formal friendship significantly changes the image of late fourteenth-century Florentine society. Patronage takes root in social contexts characterized by clear hierarchies of power and concentrations of economic, social, cultural and political resources in the hands of a few. In contrast, the prevalence of formal friendship implies a social context characterized by a more dispersed, fragmentary, fluid power structure in which the correlation between wealth, business success, family power and political influence is rather tenuous 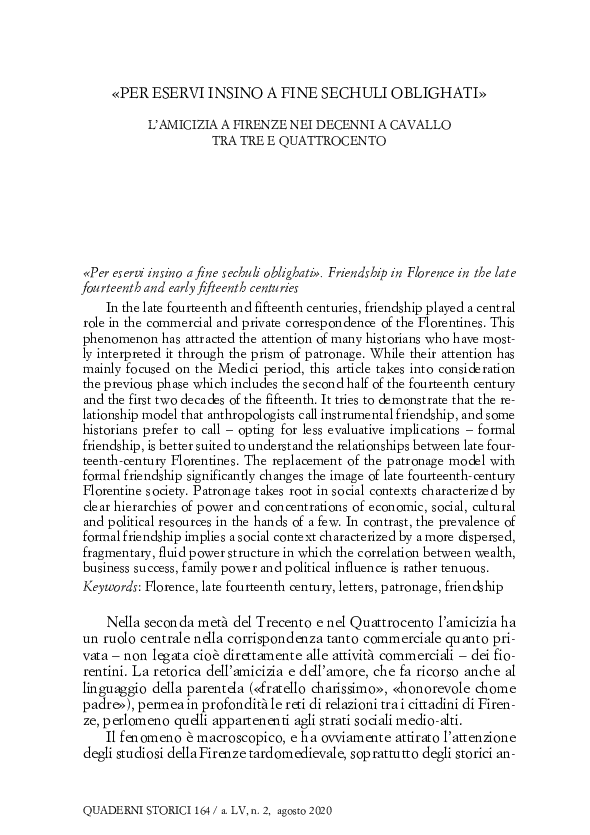