Although the history of Mediterranean slavery, as a consequence of the corsair war and the redemption from captivity received in the last decades great attention by international scholars, equal attention has not been paid to the Muslim redemption of the coreligionist prisoners in Christendom. Moreover, thanks to the abundance of European sources of religious orders (first of all Trinitarian and Mercedarian), of the numerous secular institutions and of the ecclesiastical congregations and confraternities dedicated to this purpose, spread both in Catholic and in Reformed Europe, and thanks to the amount of records produced by those who returned from slavery and central and peripheral political institutions, the study of the redemption of Europeans has introduced and spread the opinion, which has become almost a historiographical commonplace, according to which Muslims do not redeem, but rather exchange the coreligionists prisoners. This essay aims to contradict this commonplace. In fact the traces of «ordinary redeemers» can be found in the notarial sources; they allow us to intercept the intense and individual redemptive activity of the «Moors» and show a dense commercial networks that, in the case of Palermo, gather around the royal blood refugees of the hafside dynasty. 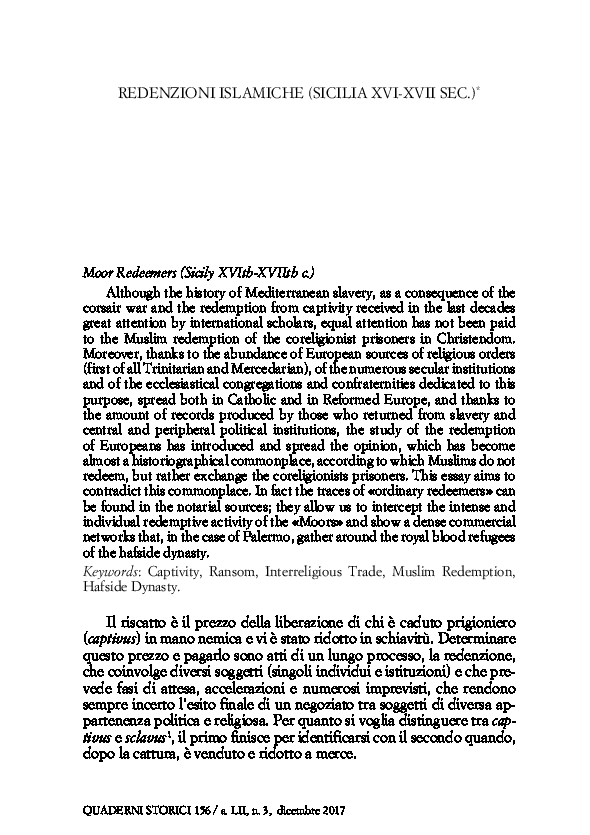