The interest towards the history of collective resources in Italy significantly grew over last decades. One of the main limitations of the studies which emerged so far is the lack of interest for quantitative data. Also in Italy during the early modern age, pastures were the main collective resources. These had a certain impact on the economy, both on a local and on a State level, but the extent of such impact has not been properly analyzed yet, also due to the lack of sources. A possible (indirect) way to estimate the impact of collective resources on the economy is farm animals' count. At the beginning of the 17th century the Republic of Venice, in particular the Superintendents over common goods in the mainland (Provveditori sopra beni comunali in Terraferma), undertook a survey of goods which under Venetian laws belonged to the State, but were granted for use to village communities. In this context, communities needed to declare the goods they owned, which were indeed designated as «communal». Shortly afterwards, superintendents would list these goods in a «catastico» and granted them again to the communities under a detailed regulation. In the declaration, communities had to inform superintendents about the number of «fires», that is the families the village consisted of, and the number of «big animals », the cattle and horses that each family owned. These declarations are known for Friuli, the widest area of the Venetian «Terraferma», displaying also the most diverse landscape. It is reasonable to identify a ratio between the availability of forage deriving from communal pastures and the number of cattle for breeding. This article elaborates on this relationship by comparing mountains and plains in Venetian Friuli at the beginning of the 17th century. 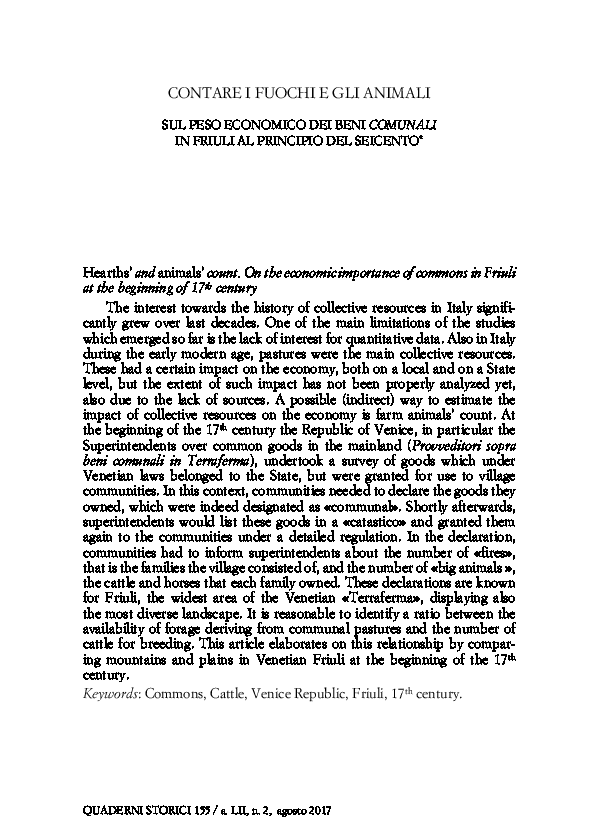