In the European Mediterranean countries democracy progressed in the 1970s and 1980s along substantially similar pathways. Successes in general elections allowed left parties either to form a government (socialists in France, Spain and Greece) or to control an important portion of the parliament (communist party in Italy). Similar policies and instruments have been adopted that focused on public expenditure and administrative decentralization. The idea was to multiply the local instances of participation where party officers and citizens could meet to discuss and solve problems concerning the scholastic system, the local and regional traffic, the urbanization and the healthcare system. «Participation» would overcome the increasing crisis of representation that affected most political parties and the disaffection with the traditional forms of politics. However, the development of these instances (administrative districts, school councils, healthcare units, etc.) multiplied the opportunities for intermediations and compromises that became even stronger as the envisaged budgets grew higher. It was the beginning of an era of forms of personal - or small groups - power, connected to the «participated decentralization» that sometimes resulted in opaque behaviours, absence of controls and corruption. In this essay the creation of the «Osservatorio epidemiologico del Lazio» has been taken as an example of this intertwining of democratisation, participation and personal and small group power. 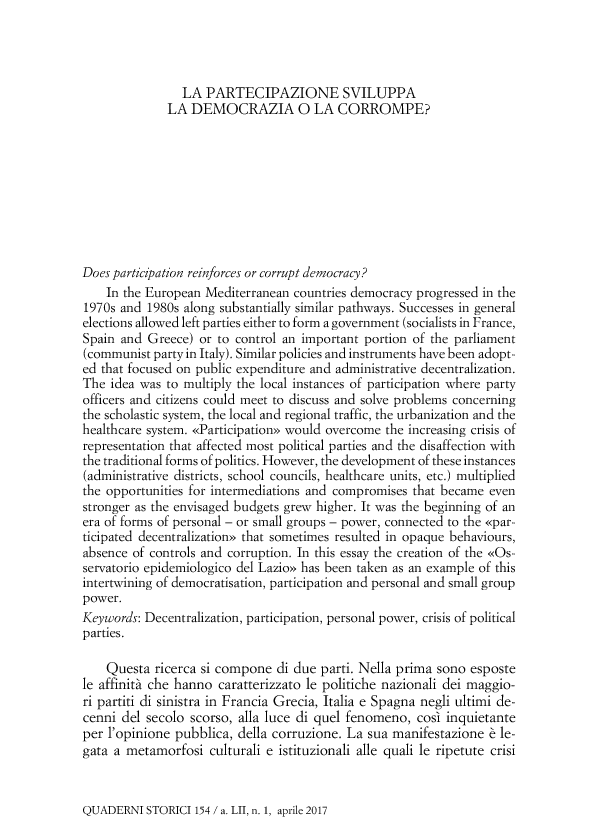