This essay tells the judicial story of how, in 1619, the Court of the archbishop in Monreale - one of the most important centres of power in Sicily - launched a ferocious disciplinary campaign against the practice of usury in the city of Corleone. The case demonstrates how, within the cultural universe of the "ancien régime", usury - as both a crime and a sin - represented an illicit act for which the legal domain was characterised by the coexistence of many different kinds of regulatory systems, each with their own distinct language. In particular, the story highlights how the judicial process was marked by an overlapping of the "foro interno" conscience with the "foro esterno" of the Courts. An examination of one of the transactions of the accused - concerning a legal point which was to assume a central role in the judicial proceedings - presents the problem of the role and function of commutative justice in the culture of the "ancien régime". In addition to the aggrieved party of the economic operation in question, four experts in casuistry also played a role in the proceedings when - immediately preceding the opening of the case by the archbishop's court in Monreale - they were called upon by the accused, in order to save him and resolve the many conflicts through the seeking of an acceptable solution. The arguments put forth by the four ecclesiastics regarding the juridical measure which they had expressly brought to the Court's attention and could therefore no longer be ignored, clearly reflect how commutative justice, namely justice pertaining to the contractual sphere, was not always subjected to, or a function of, the logic of the distributional culture in existence at the time. 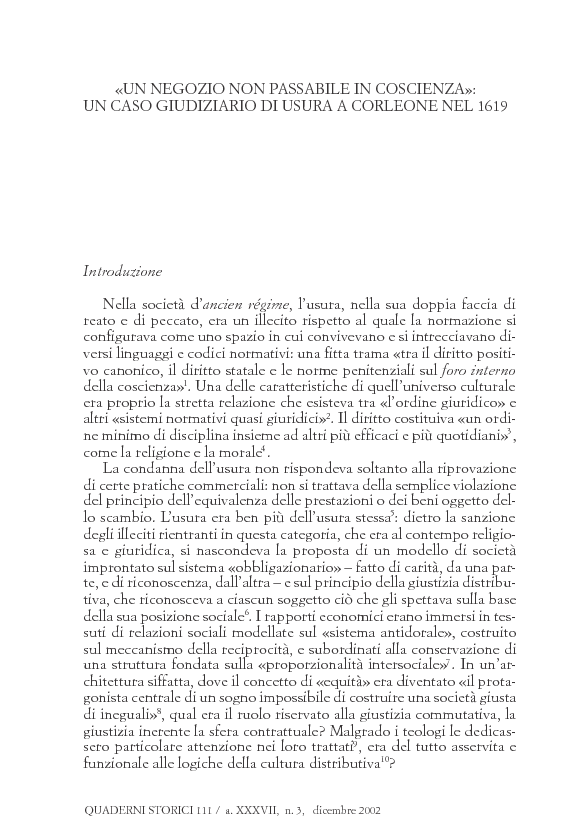