In the year 1638 the Venetian noblewoman Donata Tiepolo, together with her daughters, lodged an appeal against two donations, her mother-in-law's and her own one, as well as against her late husband's, Domenico Trevisan, will. In Domenico's plans, such legacies were meant to perpetuate the ever-lasting memory of his household via the institution of a primogeniture right and the building of a magnificent memorial. Opposite to such view, Donata took legal action because such legacies has been extorted and her late husband's will was against her daughters' right for a fair share of their father's inheritance and of their marital dowries. Against all predictions, they succeeded. This case-study, anomalous in its outcome and in the legal battle engaged (thank to the tool of the so-called «protesto segreto») shows private and public strategies, brutal action and perverted logics acted by the patriciate in order to guarantee its perpetuation in the first decades of the seventeenth century. But it also shows the mentality that stood behind women's choices and behaviours. Besides an unusual documentary series, uncovered in Venice State Archives, allows challenging some historical categories regarding well-assessed common places such as Venetian women's independence and their agency towards men in general, when compared to other societies and places. In this case, it is patent that such autonomy (and its legal tools) turned into an element of inner fragility within the family, let alone a permanent source of potential conflict between generations. 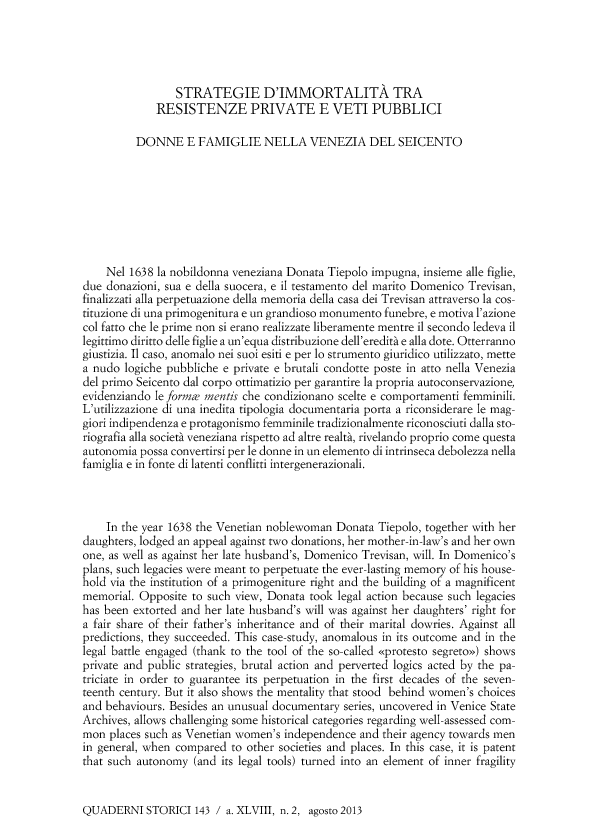