This articles investigates the genesis of bank loan statistics by economic sectors, a neglected source in Italian economic history. The focus is on the events, the human and professional relationships, and the ideas on which the architecture of those statistics was based. The origin of this source lies with the 1936 Bank Law, which overhauled the analytical and informational needs of banking, thus requiring new bank loan statistics. This source encompasses a remarkably long historical period, from the aftermath of the 1930s bank crisis to the first oil crisis in 1973. The article examines the birth of credit statistics by economic sectors against the background of the traditionally difficult relationship between statistics and economic theory in Italy. In this respect, the article highlights Mortara's positive role. He contributed to create a solid and, in spite of the Fascist regime, scientifically independent institution, which was a prerequisite to produce reliable and long-standing statistics. The article lingers also on the teacher-pupil relationship between Giorgio Mortara and the twenty-five years old Paolo Baffi, future Governor of the Bank of Italy. Baffi proposed a bank loan classification system opposite to Mortara's project. The former would be adopted eventually. Mortara accepted with no regret such an outcome which, as a matter of fact, underscored his pupil's intelligence and autonomy, besides the intellectual vitality of his institutional creature, the Research Department. The philosophy of Baffi's classification was theory-oriented, as it was derived from the most updated studies about business cycles. However, it was also very pragmatic and rooted in the Banca Commerciale Italiana's experience in credit statistics. In fact, the Banca Commerciale Italiana's managing director Raffaele Mattioli can be also considered one of the fathers of official statistics on credit by economic sectors, together with Paolo Baffi and Giorgio Mortara. 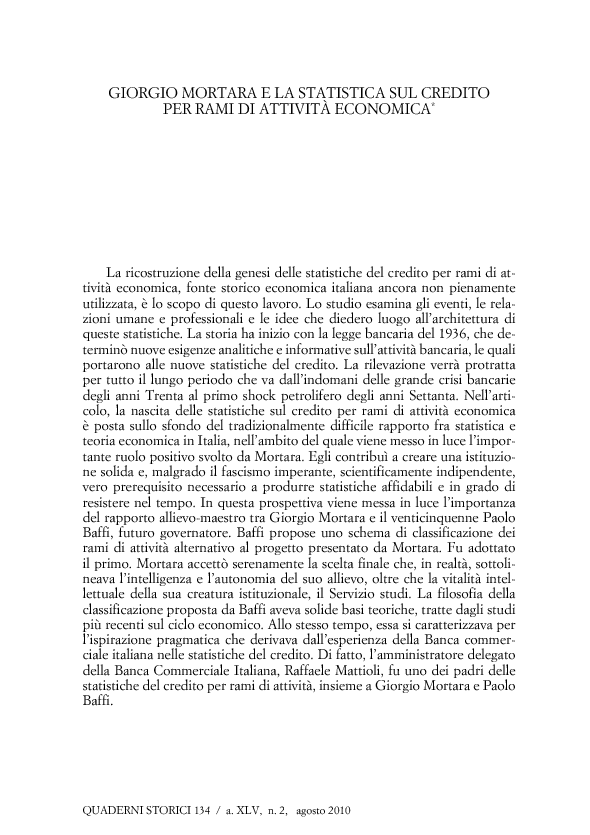