The sources that allow us to reconstruct the biographies of Renaissance mystics are principally literary and represent a very particular textual typology, that of hagiographic "legende". The comparison of these "legende" to various other sources, nevertheless, reveals significant points of convergence that demonstrate with greater clarity the contribution of the hagiographies to the construction of an exemplary figure. This study, starting from the testaments dictated by the mystic Caterina da Racconigi, a member of the order of dominican penitents, aims to throw light on the way in which laypeople and eccesiastics, of every social class and cultural level, perceived these female figures of "prophetic" charisma who placed themselves as mediators between the public and the group that supported them. We are not dealing, in this case, with notarial acts drawn up to contribute to the "fama sanctitatis" of Caterina; rather, these documents direct attention towards a different context from that of the hagiographic. The testaments of Caterina do not constitute a discourse in which the consumers and producers of her sanctity engaged in order to certify her authenticity; in them, Caterina acts within an extremely complex social context, characterized by a plurality of differing political references, through which there emerge the conflicts and bonds of familiar relations. 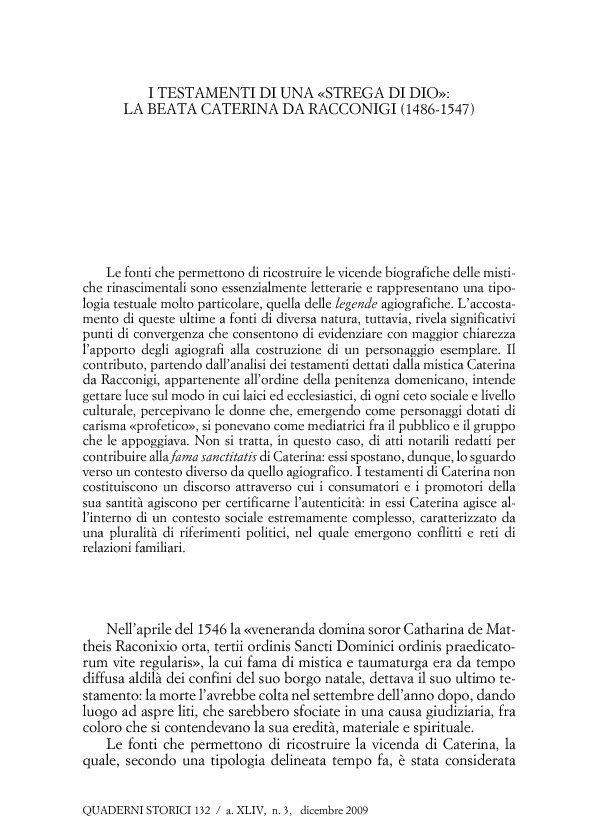