This article reconstructs the strange vicissitudes of Alessandro Amidei, a Florentine possibly Jewish, who moved to England in 1656. It seems that he taught Hebrew at Oxford and Cambridge in the 1650s, while it is certain that he was professor of the same language in Edinburgh in the 1670s. Asingular figure with a shifting and elusive identity, on his arrival in England Amidei presented himself to the Coetus of the foreign London churches as a Catholic ecclesiastic converted to Protestantism. However, in the following years he professed to be a Jew converted to Christianity. We do not have enough elements to establish the truth. In 1684 he was involved in what seemed to be a case of attempted murder at the damage of the sons of Barbara Palmer, Duchess of Cleveland, the attack being planned by her lover at the time, some actor of dubious morality. The Duchess' sons accused Amidei of having poisoned their wine, although this presumed conspiracy was probably their own invention, a strategy to put an end to the union between their mother and a most embarrassing lover. The actor was released because of unsubstantial charges. In spite of the reputation he gained in the affair, in the following years Amidei - a character of endless resources - maintained relations with the English intellectual milieu. In the 1690s he was again in Cambridge, where he wrote at least two letters in Italian to John Covel, prominent vice-chancellor of the University. Amidei is also the author of an unpublished Italian translation of the Book of Common Prayer dated 1661. Amidei's story is interesting for various reasons. First of all, and whatever his real religious identity, his case shows how in the philosemite England of those years he found it more convenient to present himself as a Jew rather than a converted from Catholicism. His story is also paradigmatic of the bizarre world of destitute wretches, often unfrocked friars and priests, who moved around the Italian protestant church of London passing from one confession to the other in search of some form of financial support. 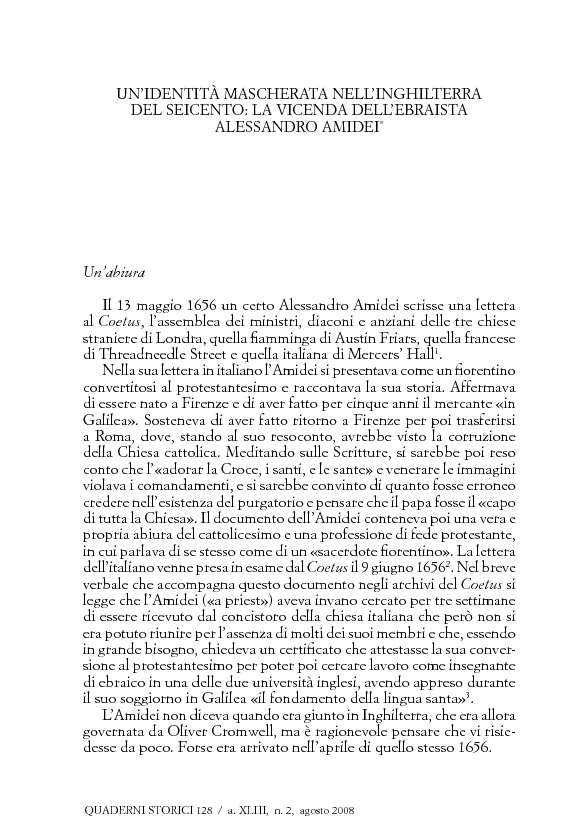