For canon and civil law, between 12th and 15th centuries, "Minores" were all those subjects who, because of their low social condition or because of their uncertain and poor fame, were "infames" and therefore considered unequal to the "potentes", in particular those from the ecclesiastical ranks. Therefore, "Minores" meant in both the juridical, the jurisprudential, and the penitential sphere, a condition of separation and distance from the ruling class of the society. However, a detailed analysis of juridical and theological-moral texts reveals that this appellation, which in itself betrayed dependence and submission, was extended not only to social strata commonly regarded as marginal, as the "pauperes", "servi", "criminosi", "leprosi", "heretici", "judei", "banditi", but also to other rural and urban groups: lay people of small or medium wealth, clerici of low condition and culture, women, the underage as well as the corpore vitiati and furiosi, who were such as a consequence of physical and mental accidents and could not access to the Holy Orders. From this point of view the word "Minores", in its full meaning of not suitability, showed the failure to belong to the Society and concerned therefore not only those to the margins of the "society of Christians", but the majority of those who inhabited it. However, it was possible to become from "minor", untrustworthy, to "Minor", with an excellent reputation, by turning one own's image of poor reliability into a new identity more credible, even charismatic. The paths conducting from a minority tainted with infamy to the glorious evangelical "Minoritas", exemplified by the Friars Minor, were nonetheless arduous and could not be undertaken by all those who belonged to the crowd of "ignoti" and poorly esteemed. 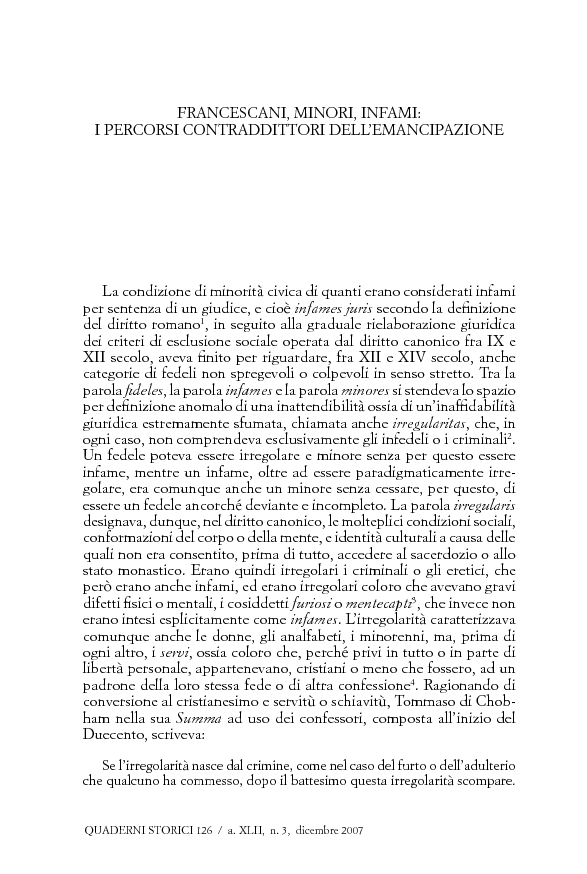