This essay examines the practices which led to territorial control. The analysis concerns documents produced in the Imperial Feud of Spigno in the seventeenth century. This documentation clearly illustrates the institutional, juridical and territorial fragmentation of the S. Quintino Abbey area, which used to be the most important medieval ecclesiastical institution in South Piedmont. This paper examines two trials: one against a priest charged with immoral behavior and another against women charged with witchcraft. The paper also analyzes the correspondence between institutions and local delegates, as it documents the actions through which local institutions tried to demonstrate their right to "in loco" jurisdiction. These actions and strategies, along with the use of specific language, illustrates how a multiplicity of jurisdictions co-existed in the same area. The Church and the Inquisition operated in this "in between" area. The preparation of an inquisitorial trial implied the negotiation of juridical norms, as well as the choices made by the protagonists (bishops, laymen, Inquisitors). Moreover, a great deal of information is given regarding the construction and administration models of a such a fragmented territory, which did not have a center or a community and in which prerogative had to be negotiated, practiced and legitimized. 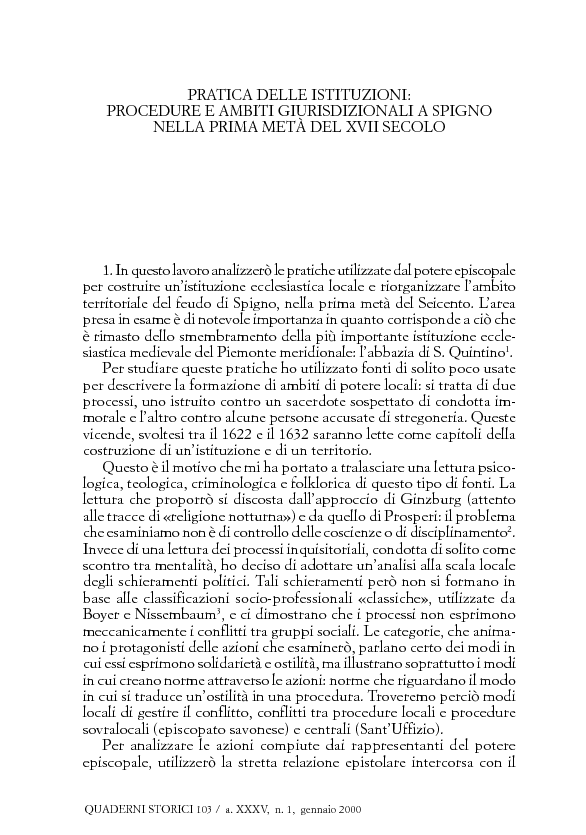