Between 18th and 19th century, in some rural areas of the South of Italy, the traditional production of low value olive oil destined to manufacture and lighting is replaced by the production of high value olive oil for food. This momentous innovation, that causes growth, change of market circuits and social relations, territorial differentiation, is examined in this essay mostly through the biography of the entrepreneur - Pierre Ravanas - who conceived and carried out the project of transferring the simple technology for the production of edible oil from his native South of France, relatively poor in row material, to the South of Italy, producer of vast amounts of olives badly manufactured: a great feat of social innovation not matched by personal success, since, after about 20 years of good profits and high public acclaim as benefactor of the economy of the kingdom of Naples, Pierre's career ends up in bankruptcy. The entrepreneurial biography - a way of access to the innovation processes out of date in recent historiography, largely focussed on contexts and 'path dependencies' - seems to offer in this case (and perhaps might offer in a few other cases) precious insights about aspects that risk to remain in the shade: namely the role of social agents and their choices in front of predictable and casual events and of a context that often produces contradictory signals that each actor might perceive differently. Seen from this point of view, social innovation recovers its complexity and its "novelty" in relation to its "preconditions". 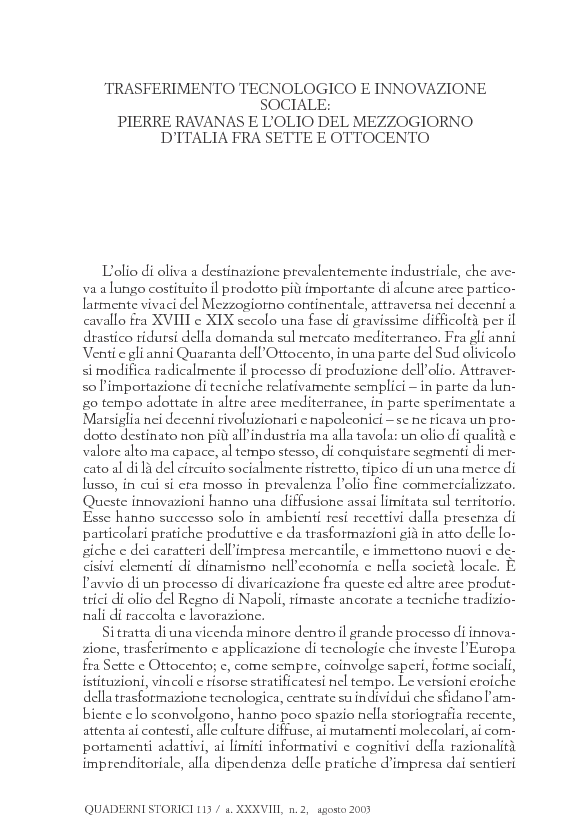