The political, social and cultural transitions following the ethnic conflicts and civil wars that have rocked Latin America and Africa over the last thirty years have been based, in some cases (Chile, South Africa, Sierra Leone, etc.), on models of reparative justice, otherwise defined as "post-conflict justice". As an alternative to retributive justice, the reparative variety concentrates on the "victims" and foresees the institution of Commissions aimed at bringing to light the "truth" of the past, and thus the reconstruction of a cultural memory able to favour processes of national reconciliation and, possibly, of forgiveness. Starting with the analysis of the Valech Report of the "Comisión Nacional sobre Prisión Polìtica y Tortura" recently instituted by the Chilean government, the article reflects on some of the themes and cultural meanings inscribed within such a rewriting of the past: how is reconciliation reproposed, and which cultural subjects are in play? How is blame and responsibility assigned? And, further still, how does one write and witness the "evil" of torture? Using the tools of textual semiotics alongside cultural and sociological reflection on the reconstruction of memory, and on those social topics with which suffering is faced, the article attempts to confront the Chilean ritual of reconciliation with that which took place in South Africa, thanks to the Truth and Reconciliation Commission. 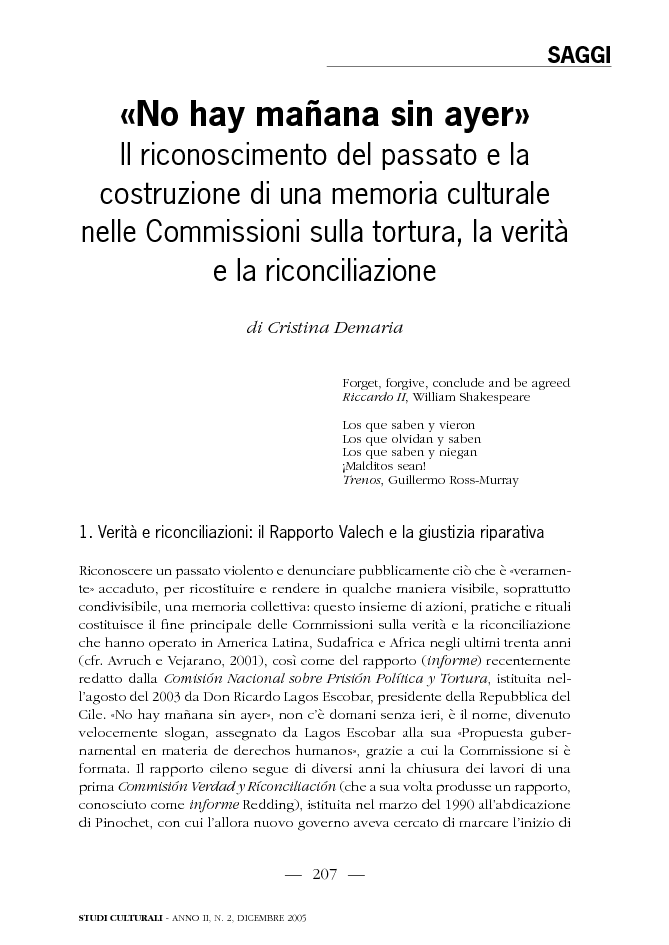