The article aims to highlight how the polygraph "Delisle de Sales" (1741-1816) treats the literary form of the "entretien" in his work "La Philosophie de la nature", published for the first time in 1770. A new alliance between natural history and entretien emerges through the analysis of a particular text, titled "Drame raisonnable". This is a short Socratic dialogue, full of irony, which describes the imaginary adventures of Newton - emblem of the empiricism of the Enlightenment - in Senegal. Newton, presented as a vegetarian, arrived in Africa to check its calculations on the tides. Here he has a conversation with an oyster, a merman, and a native African albino about whether or not they should eat each other. In this case, the entretien is not trivially a simplified illustration of the issues addressed in the theoretical sections of the book (above all the problem of the gradual perfection of the great chain of Being), but rather a genuine application of the philosophy, which brings out the truth through the dialogical practice. In this perspective, the literary form of the entretien allows "Delisle de Sales" to implicitly articulate his personal conception of philosophical practice and give cohesion - through the strength of the textual frame - to a work characterized by the fragility of its argumentation. 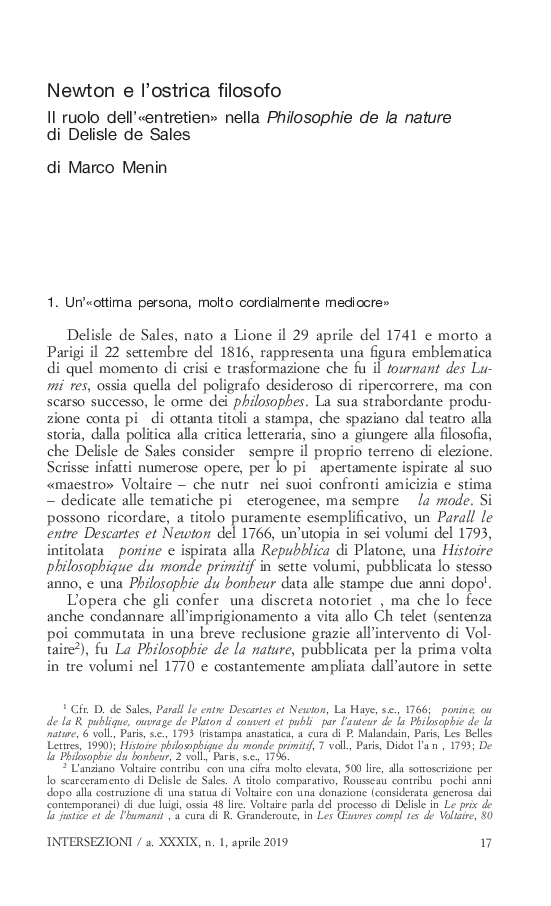