The issue of rules that everyone must follow to give value to life is as old as thinking man, who will face necessarily, sooner or later, a Deuteronomy, the multiplicity of rules, all of which - quite rightly - claim to be respected. This approach could be useful for a correct placement of the "ICOM Code", and to comment adequately its ambitious name, placing the problem, for example, if it is an ethical code, or a code of deontological ethics, at least for the reductive way in which this definition has now entered into use to describe current principles and standards of proper behaviours related to specific professional groups. This intervention will be limited to a few brief remarks, strictly legal, as to the value and functioning of the operating rules and their treatment in a case like this, where a discipline, supranational, non-institutional, showing a name with the adjective "ethical" (the ICOM Code) must be measured by a National regulatory system which clearly has full legal value. The analysis allows some conclusions. First, it is possible that the ICOM Code has a good validity in Italy, not because it is adopted, recalled or incorporated by law, but because the complex and layered current regulations include provisions for museums in general very consistent or in conformity with its indications. Even where this is not, its implementation is technically possible when the museum is equipped with sufficient decision-making autonomy, as it is quite visible whenever the museum is run by a dedicated legal entity, either public or private. It is a different story, instead, when the museum is a department or a part of a public body, as it is for most of the Italian state museums, in which case the ICOM Code can certainly work as a "soft law", and in fact this address is shown in the act of Italian ministerial standards. However, there remains a considerable gap between what the code assumes - sufficient autonomy of the museum and its makers - and the reality of most of state museums, offices today - or even segments of office - of the ministry, even in spite of legislation itself. As for the museums of local institutions, the legislation offers many possibilities for the adoption of the ICOM Code, but the reality still presents significant differences. Italian legislation in recent years has clearly innovated the theme of the mission of museums, in the sense that now the task required is at least double, because there is, next to protection of collections, the so-called "valorisation" of cultural goods; but the real news, I would say cultural, is elsewhere, in the sense that protection and valorisation are centred around a key issue: the legislation in force today tells us that in fact the public functions are aimed at something that is called, with terminology also questionable, the "fruition", the public use. For the Italian regulatory system, in short, any decision must value the cultural goods from fixed points of protection, but it must then navigate to fruition. One wonders if the ICOM Code is set in that way, if all its principles, and propositions that follow, clearly bear the ultimate purpose of the public use, or not yet, as in the past it was common idea, are structured from the mere conservation, considering the public, its needs, its diverse and complex characteristics, a kind of result, a margin, in front of the fundamental aspect of protecting. 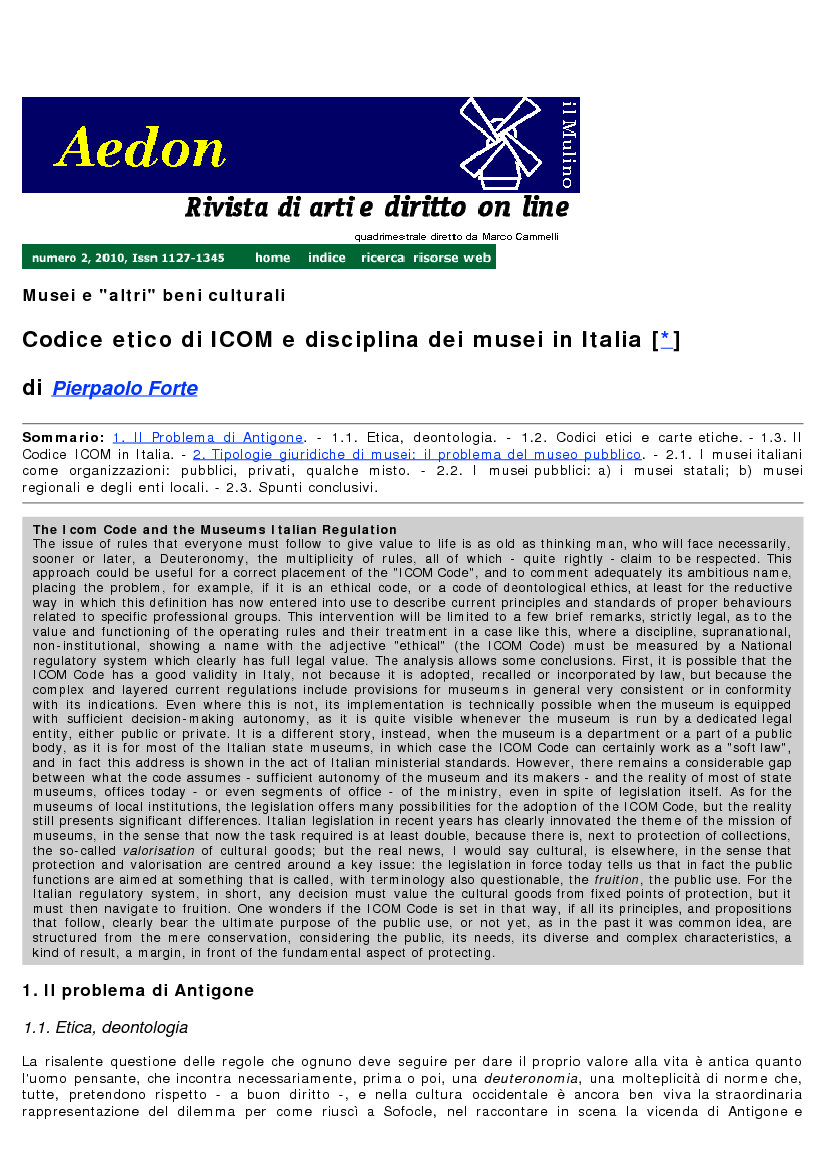