This paper examines two "silver linings" with respect to the daunting question of European welfare state futures in the wake of the global financial crisis. First, historically over the past two decades, the analysis reveals that the overall scope of social reform across the member states of the European Union, although varying widely, has been more proactive and reconstructive that is often argued in mainstream comparative studies. Alongside retrenchments, there have been deliberate attempts - often given impetus by intensified European (economic) integration - to rebuild social programs and institutions to accommodate the new economic and social realities of the 21st century. The more prospective, second sign of progressive reorientation is that in the aftermath of global financial crisis, "social investment is no longer dismissed as 'fair weather' policy", as epitomized by the launch of the "Social Investment Package for Growth and Social Cohesion" by the European Commission in 2013. In terms of social investment policy analysis, the paper distinguishes between three interdependent policy supports: (1) easing the "flow" of contemporary labour market transitions; (2) raising the quality of human capital "stock"; and (3) upkeeping strong minimum-income universal safety nets as social protection and economic stabilization "buffers", viewed interactively through the lens of the life course contingencies of modern familihood. In conclusion, the case is made for a "social investment pact" for Europe, allowing governments to pursue mid-term budgetary discipline and long-term social investment reforms in line with new EU economic governance procedures, potentially allowing for a viable balance between "economic" and "social" Europe after the crisis. 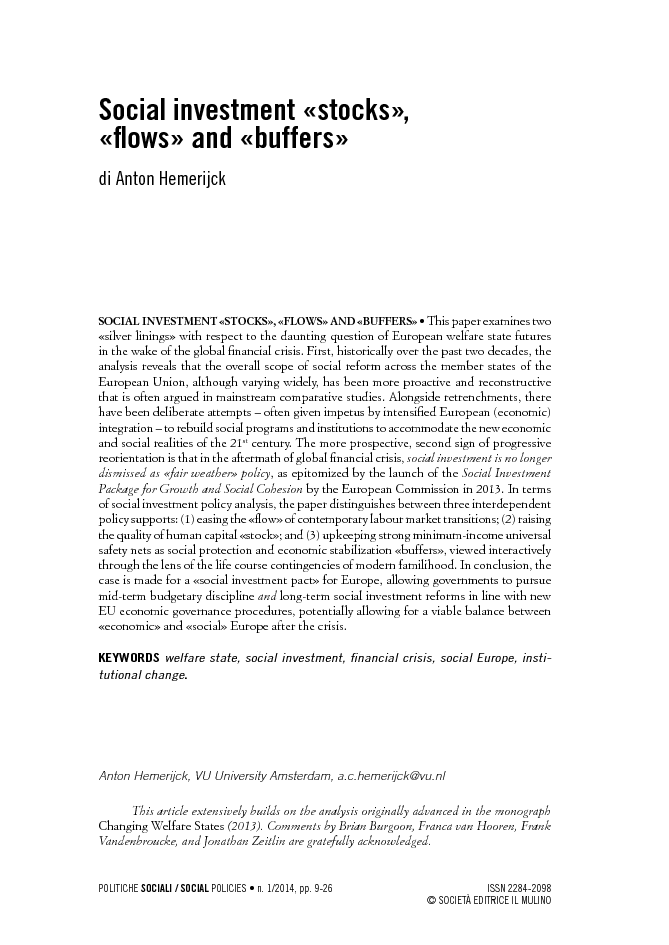