The reform of the labour law in France, which was passed despite tense opposition, and the 'Jobs Act' of 2014 in Italy appear to be late applications of 'supply-side'-oriented policies for employment activation, still taking inspiration from the 'Nairuvian' models once conceived in the atmosphere of Thatcherian Britain. However, the relevance of the 'Keynesian' multipliers to the consideration of the demand-side factors and the impact of fiscal policy is now also being admitted within non-radical opinion in the macro-economic 'think tanks'. In the elementary Keynesian framework, the labour requirements of an economy operating at less than full capacity is simply a 'derived' demand, given the aggregate 'final' demand. The apparently trivial consideration, that is, that 'short-run production functions' might also be read in the 'inverse' sense, particularly in the context of stagnation, has apparently not yet been incorporated into the current debate in the specialist research on labour. The 'employment multiplier', as originally conceived by Kahn, was the prior source of inspiration for the Keynesian 'income' multiplier, and it is indeed a simple task to derive expressions for the former given the latter. I will repropose and update an elaboration inspired by my earlier work on this occasion, believing that the concept and the methods carry renewed interest. A simple exercise for the differential performance of employment recovery in the USA and in the euro area in the aftermath of the 'Great Recession' is included as an exemplifying application. 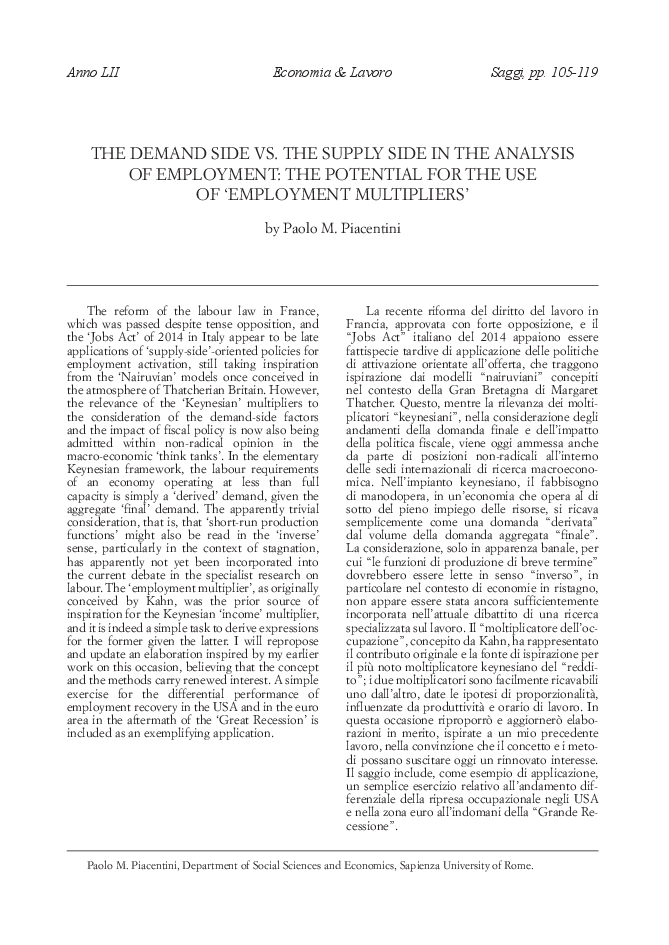