The article examines, also through various scientific discussions held with the Author, the dialectical relationship - which surrounds all Massimo Pavarini's work - between criminal science and dogmatics. According to Pavarini, the scientific point of view reflects an empirical and critical knowledge that moves from a direct, non-normative, non-deductive reasoning about the criminal matters. Hence a sociological, statistical, criminological and analytical method. Conversely, the dogmatic method, affected by the criterion of deduction from norms or principles, albeit enriched by empirical knowledge according to the instances of integrated criminal science, remains conditioned by premises that ideologically conceal or mislead reality. However, for a Constitution-oriented criminal lawyer, the relationship with empirical knowledge on criminal matters has a founding, not corrective nature: the dialogue between facts and norms, between "what is" and "what ought to be" is constitutive for the same juridical science, which can legitimize or delegitimize the punitive system depending on the outcomes of its performance and in relation to its founding principles. The reality of punishment, and that of imprisonment, are thus a central test bench for the general theory of criminal law, not only - as Pavarini thought - for the purpose of putting into question dogmatics but also for that of the criminal system possible justification (and not only mere explanation), as justification and explanation are both essential features of the criminal law epistemology. The sensibility for the in-prison human reality, which revisited with constant empirical studies the original neo-Marxist readings, played a decisive role in Pavarini's position as to the critical knowledge of the "criminal question" and his dialogue or conflict with the s.c. dogmatic science, much more than the traditional analytical approaches to the study of prescriptive propositions. 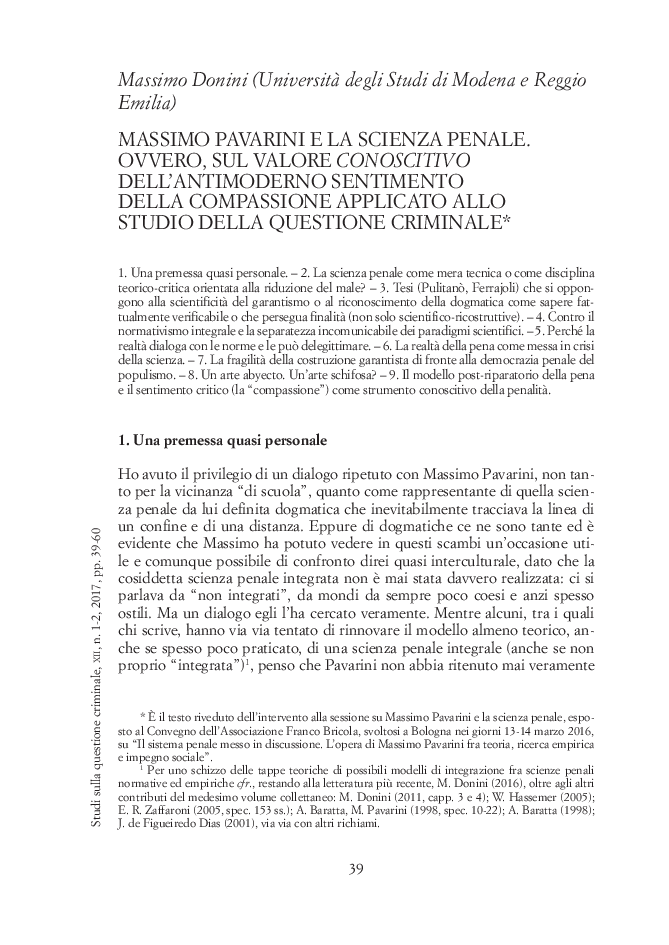