This article is written after an in-depth analysis of the Italian phenomenon of critical criminology referring to the scientific, political and cultural contribution of Alessandro Baratta and those who accompanied him in the experience of the magazine he founded, "La questione criminale", then merged into the current periodical Studi sulla questione criminale. Nuova serie di "Dei delitti e delle pene". With the term "critical criminology", Baratta means an inter-disciplinary knowledge which allows a critical approach to criminal matters, shifting the focus from the causes of criminality to the discriminating mechanisms of social control, typical of a society based on a capitalistic system of production and distribution. After a synthetic reconstruction of the studies conducted on the mechanisms of primary and secondary criminalization, the attention is focused on the critiques raised against criminal law, due to the unequal treatment that it reserves to people from different social classes. In some European countries, including Italy, the situation of the criminal legal order got worse because of the effects of emergency legislation, which was the official reaction to terrorism of the Seventies. In that period two trends, which had to become the basis for an alternative policy of social control, developed: the abolitionist movement, which supported the concrete utopia of replacing the traditional punitive system, and in particular prison, promoting different forms of perception and management of social conflict; and the reductionist movement, aiming at restraining the punitive violence, and supporting the principles of liberal criminal law and the rational criteria for a minimum criminal law. In this context, Alessandro Baratta takes a really problematic position. In fact, while he is speaking specifically of the minimum criminal law, at the same time he writes in prospect of a future social palingenesis that will allow an effective overcoming of the criminal law with a utopian abolitionist view. 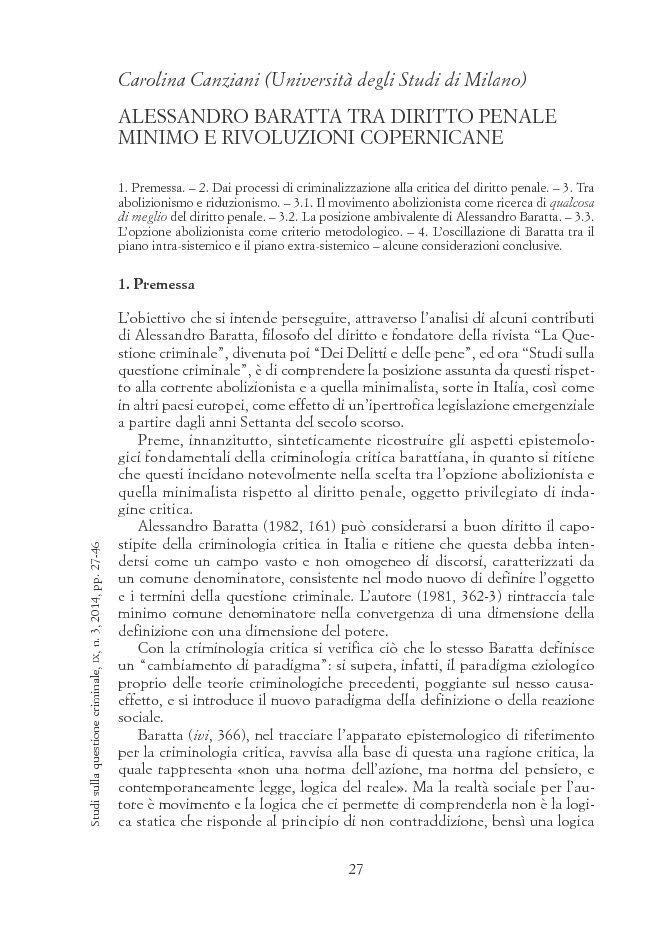