This article tries to analyze how suitable is the Louk Hulsman approach to the criminal law in an abolitionist perspective, taking in account its reality today and the contemporary changes within it. The first raised question is if the depth and complexity of the criminal law cultural and institutional roots can leave any chance to overcome its hegemony dealing with what is defined as a crime. Starting from this point several other aspects are considered, in order to evaluate the adequacy of the abolitionist proposal: the use of the prison as a simple mean of control of the under classes today, and as a mean of producing symbols about Security and Justice: a complex net of paradoxes concerning the official functions of punishment, compared with a hidden "hardcore" of prison and punishment real functions today; a wide network of ambivalences affecting the penitentiary functions and legislation today; as well as an evident tendency, in many aspects, to leave the classical criminal law principles and rationality in order to implement just more efficient means of social control. But from another side, on the contrary, we need to consider many signs of a new success of dogmatic and rhetoric aspects of the criminal law, like new retribution, hostile penal law, minimal punishment as new ideology. Because that the crucial aspect of the contemporary crisis affecting the criminal law is this clear and paradoxical contrast between the evident process of corruption of the fundamental elements characterizing the modern penal law, and the reaffirmation of its ideology and rhetoric, as means of legitimating new inclusive forms of control. That's why the abolitionist approach of Louk Hulsman can play as well a crucial role for deconstructing the terms of such a paradoxical symbiosis between crisis and reaffirmation of the criminal law. This is particularly important if we take in account the lack of democracy and the authoritarian rush embedded in the context in which this process is taking place. The aim of this article, face the particular nature of nowadays crisis of criminal system, is to give to abolitionist approach new chances and perspectives. 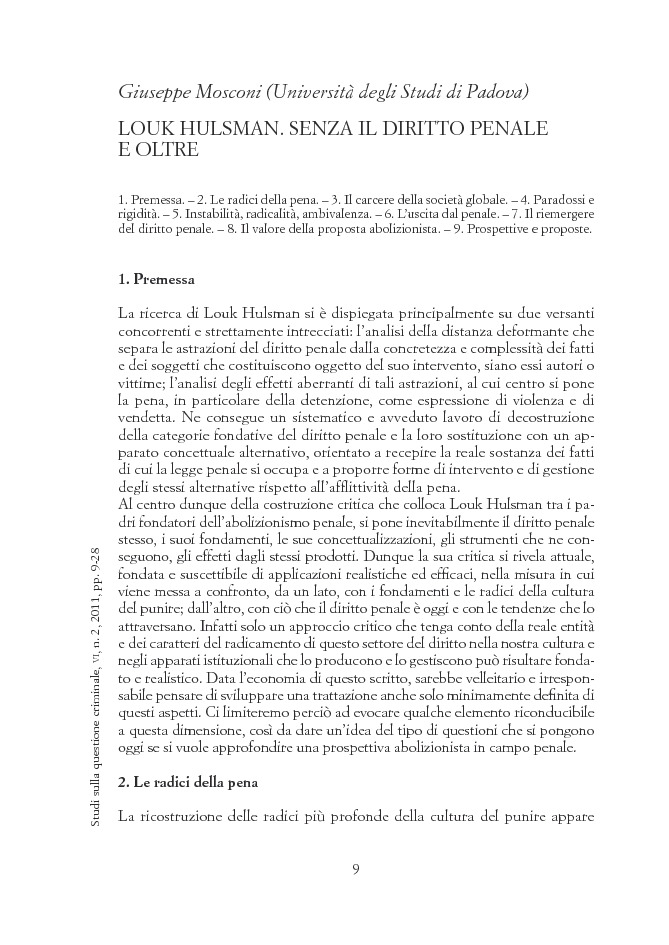