In this paper we analyze some conceptual challenges faced by Spanish-speaking children from primary school when asked to isolate the derivative morphemes RE- (re-), DES- (dis-), CION- (-tion) and -MENTE (-ly) and when trying to understand their meaning in written words. We used flexible interviews inspired by the clinical-critical methodology, where verbal reflection and interaction between the children - interrogated in pairs - is stimulated. We interviewed 60 children of 2nd, 4th and 6th grades of primary, attending public schools in Mexico. The tasks consisted of lengthening words with the above-mentioned morphemes, as well as shortening them. Children were requested to interpret the words they produced. The results reveal a three-level distinction in the word-shortening task, which directly relates to the word-lengthening task using the target morphemes. We observe a progression in the ability to cut away prefixes and suffixes simultaneously in a word, and to generate productions using affixes in both margins of the words. The methodological design allowed us to identify differences in the interpretation of the affixes: while the prefixes show conventional and stable interpretations, suffixes repeatedly show unexpected interpretations that cannot be the result of formal instruction. The acquisition of morpheme conceptualization needs further attention from a developmental perspective, which should include the children's point of view. 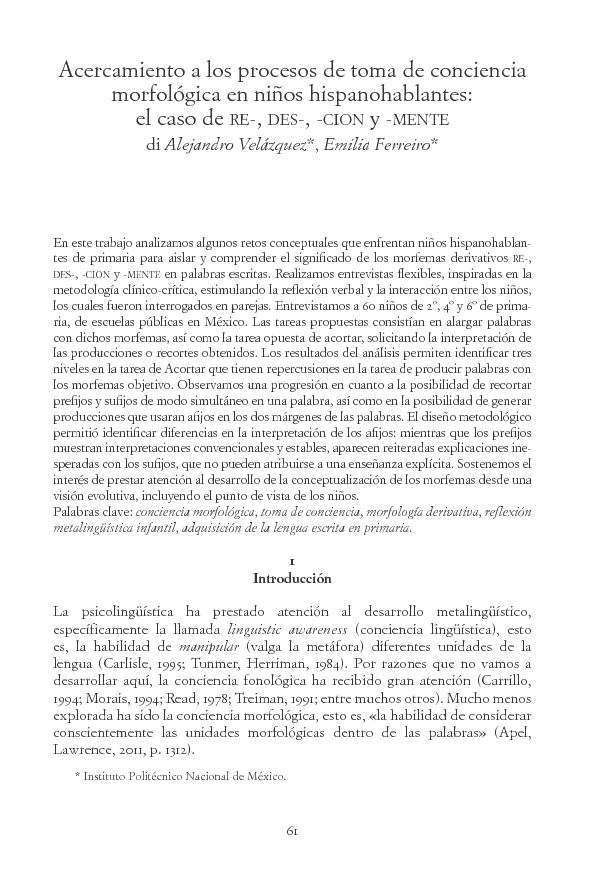