The paper addresses the issue of the methods through which the function of civil justice is currently administered. The Author acknowledges that the civil process is increasingly departing from its ultimate goal, which should be to end up with a decision the more adherent as possible to the case at hand. The Author, therefore, enquires the consequences of such a manifest shift towards procedural instead of substantive outcomes of the litigation. The point of departure is a reflection upon the evolution that the so called procedural legal relationship has gone through. The first instance trial has become more and more crucial, whereas appeal trials have become the object of recent legislative amendments which constrained the chances that upper courts will look at the merits of the appeal. As a result of such a trend, the stabilisation of first instance decisions is becoming more frequent, not for substantive reasons, rather for procedural grounds. The resulting procedural model closely resembles other legal systems' models (such as the English one), however it is affected by the role of our first degree justices and by the substantial incompatibility between the typical institutions of a legal system and the very different cultural traditions rooted into another one. A glance to the alternative dispute resolution methods, in particular arbitration and mediation, is also given, focusing on the reasons why, today, those methods are scarcely appealing and incapable of providing a real alternative with respect to civil justice administered by ordinary courts. The paper ends with some proposals, focusing on how the civil justice system should be organised, without further and useless (and even harmful) amendments to the rules of conducting trial. 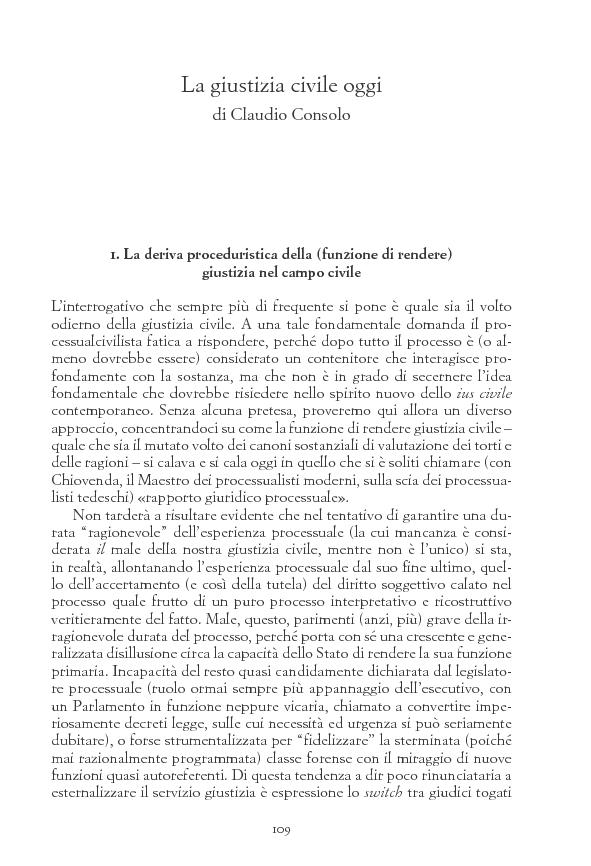