This article examines the data that may be gleaned from a corpus of 134 persons who were sent by the Popes in the capacity of legates 259 times in the Italian area in the fifteenth century, and aims to specify what real tasks were allotted to the bearers of such a title: diplomacy, provincial or city government, superintendence at religious occasions, military commands. The corpus identified in this manner is formed of persons with social importance, usually cardinals, almost 75% of whom came from central/northern Italy (Papal States and the republics), followed mainly by Spain and France. Conferring a legatine assignment could be useful for sending persons in the Pope's trust to resolve difficult situations, to remove cumbersome persons from Rome, or to reward through patronage those favoured by the Pope or European sovereigns. Provincial government offices appear mainly to have been rewards for the holders; diplomatic ones were aimed at politically stabilizing Italy in the face of domestic hostilities and foreign threats, and at orienting its tensions towards the Crusade; military tasks were complementary to diplomatic ones, while strictly religious missions are infrequent. The use of legations by fifteenth-century Popes shrank with the gradual building of an administrative apparatus of the pontifical monarchy, in which the cardinals tended to become high officials rather than politicians. 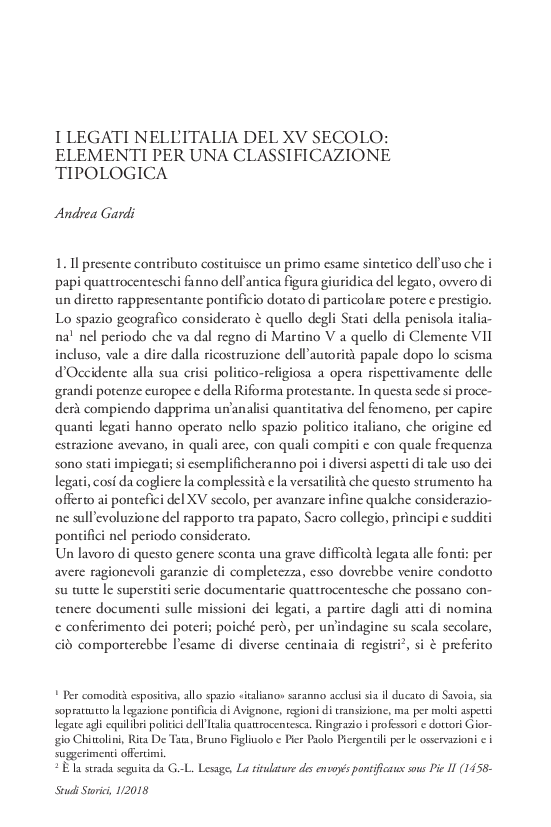