The Milan trial of the plague-spreaders of 1630 is known to us through the Enlightenment reading by Pietro Verri and through Manzoni's Catholic and romantic reinterpretation. The fortune the trial had in the age of the Counter- Reformation has remained unknown. But why did Manzoni dedicate so much interest to this affair? The thesis of this work is that behind the seventeenth-century plague, Manzoni actually saw another one, the one that had infected the minds of an entire people in France during the Terror. This is shown by a quotation that later disappeared from "Fermo e Lucia", the importance of which strangely went unnoticed. Rereading "Storia della colonna infame" from this perspective allows us to understand why, for Manzoni, this second work was closely related to the novel. For the author, the sentences of the Judges of the Column of Infamy, and those of the Parisian tribunals of the Terror, were linked by the same thread. At the origin of everything there was what we may define as the «conspiracy syndrome,» the obsession with the hidden enemy as a force capable of undermining society and the rule of law. A current theme in Europe in the mid-nineteenth century, it was a problem that long disturbed the reflection of Alessandro Manzoni in the face of the phenomenon of revolution as a great movement of the people. 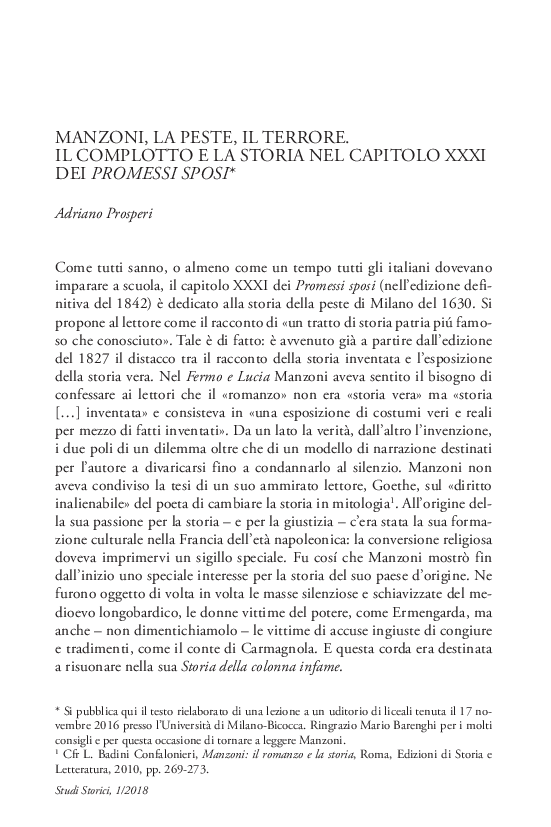