Inspired by Richard Hofstadter's pioneering studies on conspiracy theory as a tool of historiographical investigation, the purpose of this study is to examine the specific case of the intellectual and professional life of Giovanni Preziosi and the use made by him of conspiracy as an argument and a weapon of political confrontation. The analysis focuses on the years 1913-1915, a very intense period in Italian politics with the debate over the War, and its purpose is to investigate Giovanni Preziosi's contribution to the interventionist cause. Focusing on the global threat of pan-Germanism and denouncing its Italian accomplices, especially the Giolittian neutralists, the future publisher of the "Protocols of the Elders of Zion" exposed the enormous political and commercial power of Banca Commerciale Italiana, as well as the dangers of excessive tolerance of the German elements in Italy, ascribing everything to a conspiracy to enslave Italy to Germany's will. Divided into economic, military and political variants, the idea of the pan-German plan served as a response to the neutralists' arguments and for authorities - who were considered accomplices of German imperialism - to invoke more nationalist war measures. With his periodical "La Vita Italiana", Preziosi anticipated many of the anti-Semitic ideas of the Fascist period, becoming a characteristic voice on the interventionist front. He was to adhere to these ideas concerning the «occult forces» of the world until his suicide in 1945. 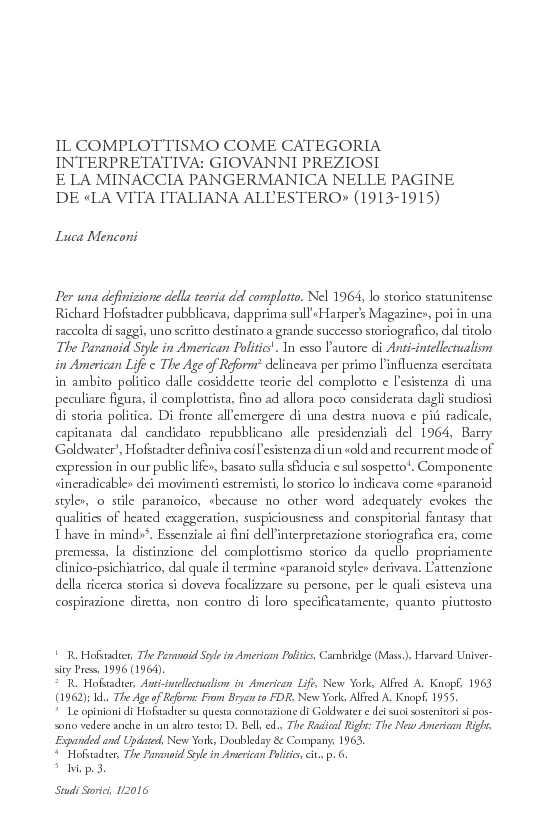