Over the past few decades in Italy, the interpretation of Fascism went through an animated debate, revolving mostly around the research efforts and theses of Renzo De Felice. This debate began in the mid-1970s, with the publication of De Felice's biography on Mussolini and the consensus (1974) and with a famous Interview on Fascism (1975). Among the main matters that triggered the debate were: the revolutionary essence of Fascism compared to Nazism's reactionary and racist characteristics; the role of the middle class as the soul of the fascist movement; and the consensus won by the dictatorship beyond police repression. These topics provoked a major public debate, which led to accusing De Felice of attempting to rehabilitate Fascism. During the following decade, the debate cooled; despite criticism of De Felice's books, his contribution to the analysis and reconstruction of Fascism was widely acknowledged. But at the same time, especially through the press and media, a «pejorative De-Felicism» spread, which trivialized De Felice's theories and turned the debate over the country's memory into a spectacle with no historical depth. Moreover, this occurred while De Felice's interests were changing. The method of studies on Fascism was in fact replaced by the issue of Italy and its national crisis as a central topic of his thinking; this shift was also caused by political and cultural needs. In this perspective, the Resistance became a topic open to passionate debate, which was to accompany De Felice until his untimely passing. 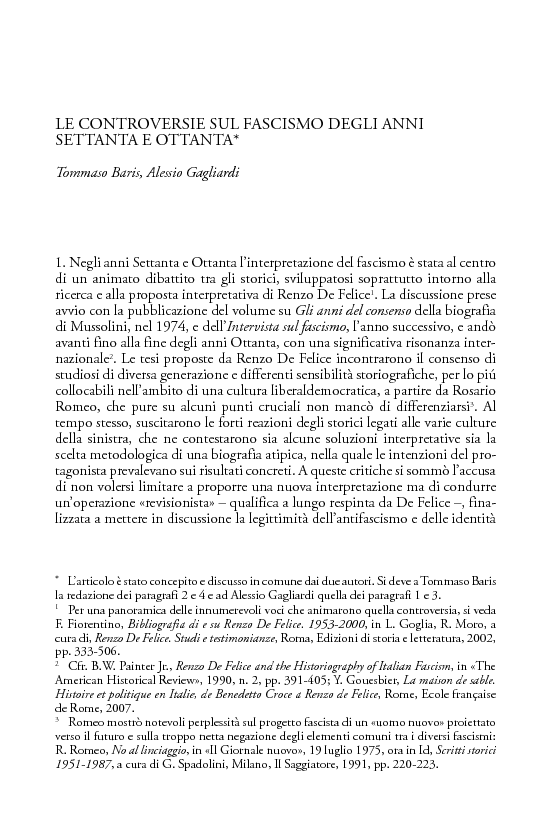