This article focuses on the ways the relationships between the Church and Fascism have been described by historians in recent decades. These relationships have been erased from the public debate or, conversely, considered from a polemic point of view for many years. Some issues were investigated in the 1960s with the main goal of clarifying the institutional aspects (Lateran Pacts, agreements and crises between the Holy See and the regime). Later, a long series of studies examined protagonists and associations, aiming often at detecting the underground thread between the reality of democratic Catholicism in the liberal period of Italian history and the role played by the Christian Democracy Party in the years of the Republic. From a different point of view, some studies investigated the relations between the Church and Fascism by underscoring the durability of the paradigms developed by intransigent Catholic thought during the nineteenth century. These studies made it possible to clarify the mental frameworks, the doctrinal issues, and the criteria of catholic political choices. New reflections were opened by the historiography that analyzed Fascism as a political religion, encouraging scholars of Catholicism to focus on Pope Pius XI's positions on totalitarian regimes and also to clarify the mutual influence between the Church and Fascism. The overall picture was deepened by the research efforts published after the documentation regarding the pontificate of Pius XI was finally made accessible. Examination of the new records did not demolish previous interpretations, but it allowed a deeper understanding of the Italian case, above all by placing it within the broader framework of international action by the Holy See. 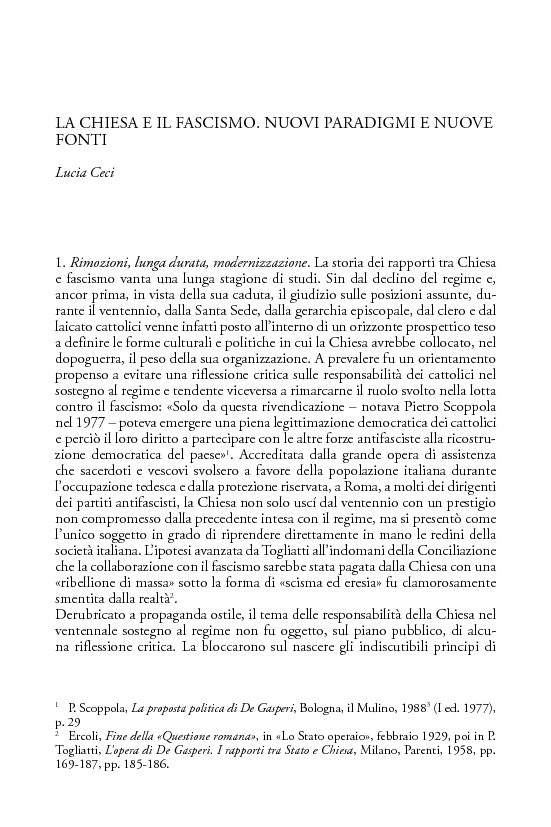