Paolo Spriano began working on Gramsci as early as the second half of the 1940s, at the start of his journalism career. However, the articles he published in the decade from 1947 to 1957 make no original contribution to Gramsci's biography. It is only in his 1960 volume on Turin during the First World War that Gramsci's activity is reconstructed within the context of socialism in that city. In his work immediately after this volume, Spriano continued to develop Gramsci's figure in the milieu of the Turinese socialist movement, while still not publishing anything of a specifically biographical nature. In the years that followed - with the exception of a brief biographical sketch aimed at a general audience - his contributions to Gramsci's biography are seen in his overall reconstruction of the history of the Italian Communist Party ("Storia del Partito comunista italiano"). Through the systematic use of Central State Archive and Comintern Archive documents, he brought out the figure of Gramsci as a political leader in an entirely new light, taking care never to isolate him from the context of international communism. After publication of this five-volume history of the PCI, he devoted his time to the events surrounding Gramsci's imprisonment, publishing hitherto unknown documents. And again, after the disputes over the relations between Togliatti and Gramsci, he took this matter in hand by both stimulating and undertaking new work. With his last, uncompleted work on the relations between Gramsci and the party, he again became the promoter of archive research, once more emphasizing the need for documentary reconstruction. 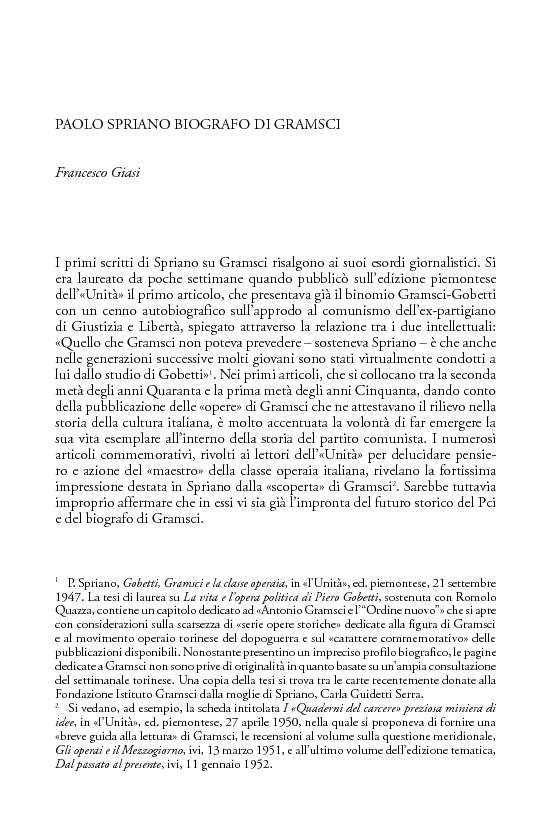