The political interpretation of the iconography of Raphael's frescoes in the "Stanza della Segnatura" in the Vatican palace is strongly supported by a reassessment of the other three papal rooms, decorated during the pontificates of Julius II, Leo X and Clement VII. In the "Stanza di Eliodoro", "Stanza dell'Incendio di Borgo" and "Stanza di Costantino", the political significance of the frescoes is in fact indisputable: they celebrate the Roman papacy and the individual popes who commissioned this cycle of paintings. In this contribution, we reassess the main theories put forward to identify the characters portrayed in the "Parnassus" (1510-1511), taking as a starting point the assumption that they are grouped according to the literary genres they practised: epic, lyric, tragedy and comic or elegiac literature. In the latter, we would include two poets looking towards the spectator, probably two contemporaries of Raphael. After numerous comparisons, our conclusions confirm that one is Jacopo Sannazaro, whereas for the other we suggest a new hypothesis, i.e. Jacopo Sadoleto. As a result, the "Parnassus" aimed to reiterate, with its strategic choices of ancient, modern and contemporary poets, the celebration of the patronage of Giuliano della Rovere, which is the real central and unifying theme of the iconographic choices made in the "Stanza della Segnatura": in this fresco, the pope is identified with Apollo, Achilles and Augustus, and presented as a champion of literature and patron of the cultural revival in contemporary Rome. 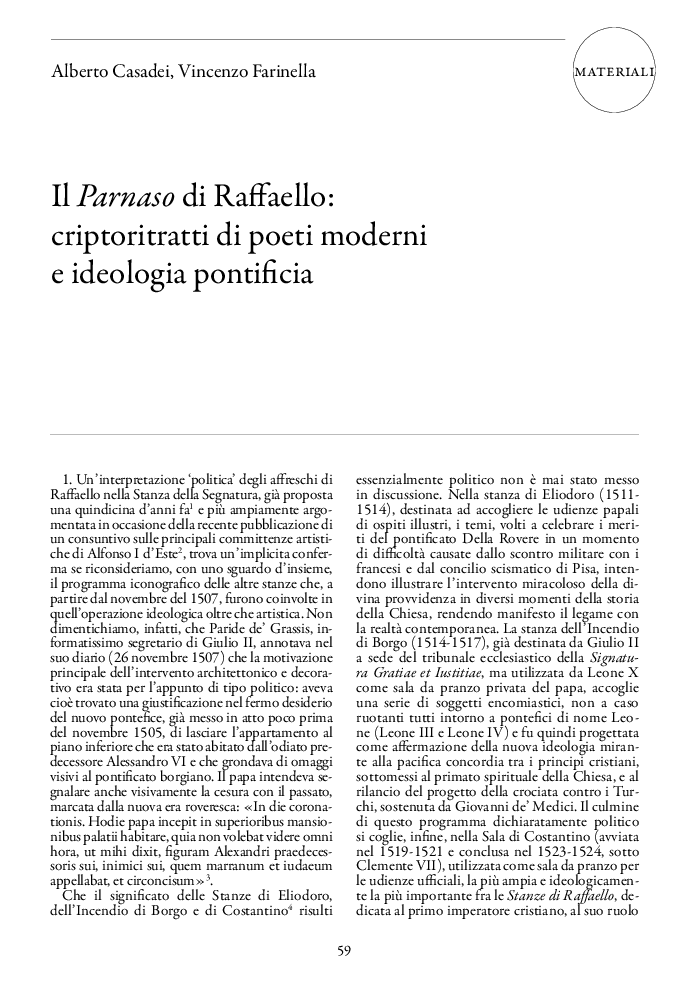