Jane Austen's writing is never more elliptical or indirect than in her talk about books, or, in other words, in her use of literary allusions. I see in "Sanditon" the culmination of a series of jokes about books that begin in the juvenilia, run through the mature novels, and flourish in this, her final unfinished work. In this article, I discuss these allusions and jokes, focusing briefly on Austen's completed novels and the Juvenilia before turning my attention to "Sanditon" to illustrate the development of Austen's subversive comic technique. As numerous critics (among them Jocelyn Harris, Mary Waldron, Olivia Murphy, Isobel Grundy, Gillian Dow and myself) have suggested, Austen uses literary allusions in many ways: to denote character, to enter into the political, religious and cultural debates of her time, to undercut certainties, to mock, and to teach. In this discussion, I am most interested in those of her literary allusions that function subversively as jokes that demand an informed and receptive audience, that tip a sly wink to the reader that all may not be as it seems, and that thus often reveal Austen to us at her most acerbic and ironic. Like all Austen's jokes, however, her jokes about books have a serious dimension, and I argue that the books that Sir Edward Denham claims not to read - "vapid tissues of ordinary occurrences" - have an important metaphorical resonance, not just in Sanditon, but throughout Austen's "oeuvre". 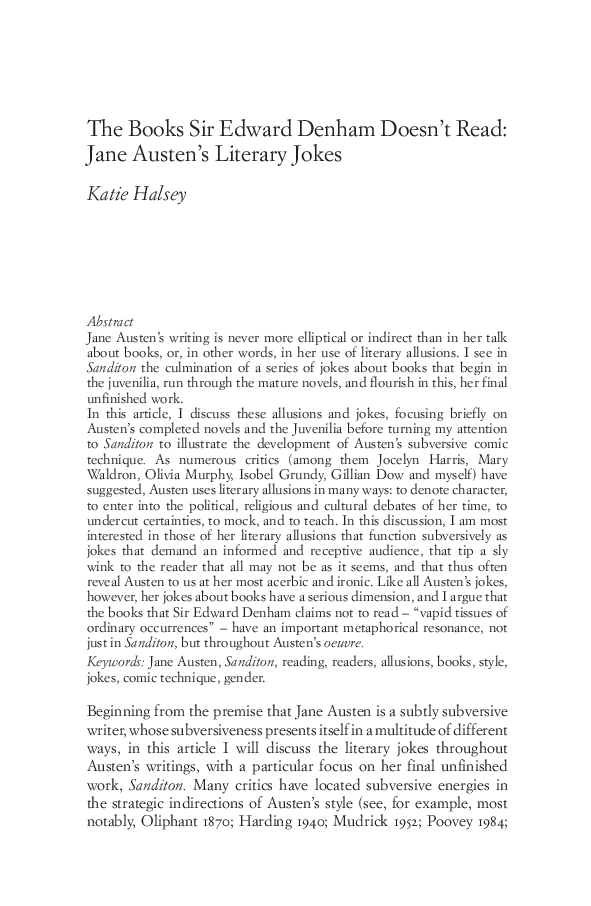