Keywords: The Year of the Flood; Bible; Ecocriticism; Atwood.

In "The Year of the Flood" (2009), Margaret Atwood sketches out a dystopic, post-apocalyptic scenario after the spreading of a disease that ends by nearly destroying the human race. Two characters, Toby and Ren, are entrusted with the task of making sense of what has happened, connecting the desolation of what remains with an analogous devastated past, in which the Earth appeared as deprived of its natural resources and inhabited by violent, dehumanised people. An attempt to find a solution to this environmental and human degradation before the catastrophe had come from an eco-religious group called God's Gardeners, who had tried to resume Biblical dictates to explain their peculiar bio-ethics. Along with Toby and Ren's memories (they were both Gardeners), the novel also presents a transcription of some oral hymns told by Adam One, the original and brainy leader of the sect, who also re-elaborated the myth of the Flood to prepare his people for the worst. In this paper, I investigate the way in which the Gardeners use and rhetorically exploit the Bible to offer a vision of life that proves to be alternative and yet complementary to the materialistic one expressed by the numerous scientists appearing in the novel. At the same time, I will discuss how Atwood employs and changes some traits of the dystopian fiction in a direction that seems to be aware of the most recent critical debates on ecocriticism. 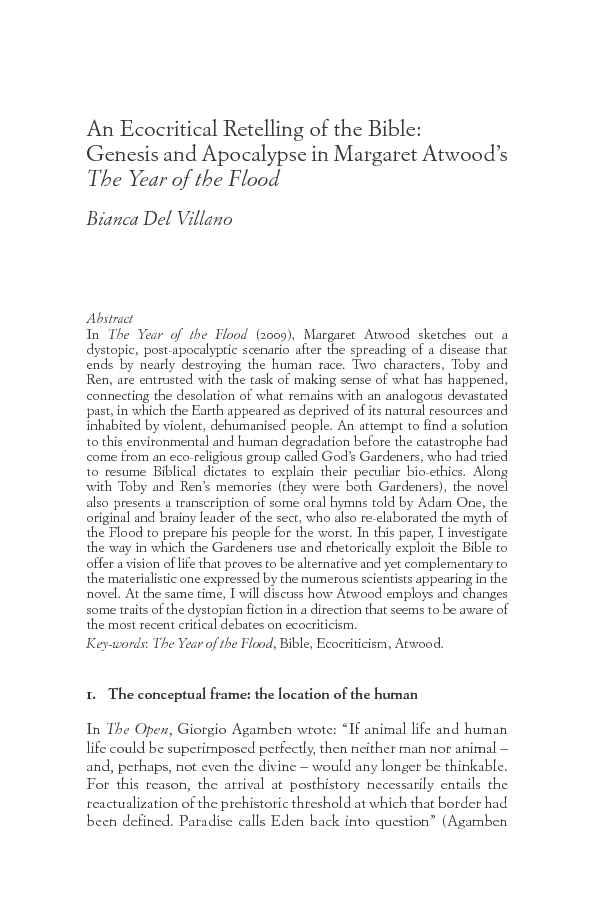