The current trend to recover "locality" by means of the dialect seems to be particularly true for Sicilian dialectal songs, since dialect is regarded as a symbol of a physical and cultural micro-space opposing the sense of estrangement and alienation caused by globalization. Many singers actually seem to be deeply involved in expressing a place identity by using their dialect which, as such, represents a powerful device to underline their intimate relation with the place they come from. In their dialectal texts singers further underline this place identity by recalling physical settings related with the space of the dialect they use. Thus, it would be interesting to try to follow these two different, and often integrated, approaches to locality: on the one hand, we find the constant reference, thanks to the use of local toponyms, to specific physical settings useful to symbolize the return to one's roots in opposition to the global village; on the other hand, we observe the use of the dialect which does not simply appear as a "local" dialect (i.e. a regional dialect or something different from the national and official language) but a "very very local" dialect within a "pro loco" linguistic choice. In the latter case, some dialectal varieties, generally regarded as rude or even "shabby" and, however not good enough to be employed for "poetic" purposes, are instead currently employed as good linguistic codes useful to satisfy the audience's poetic expectations. 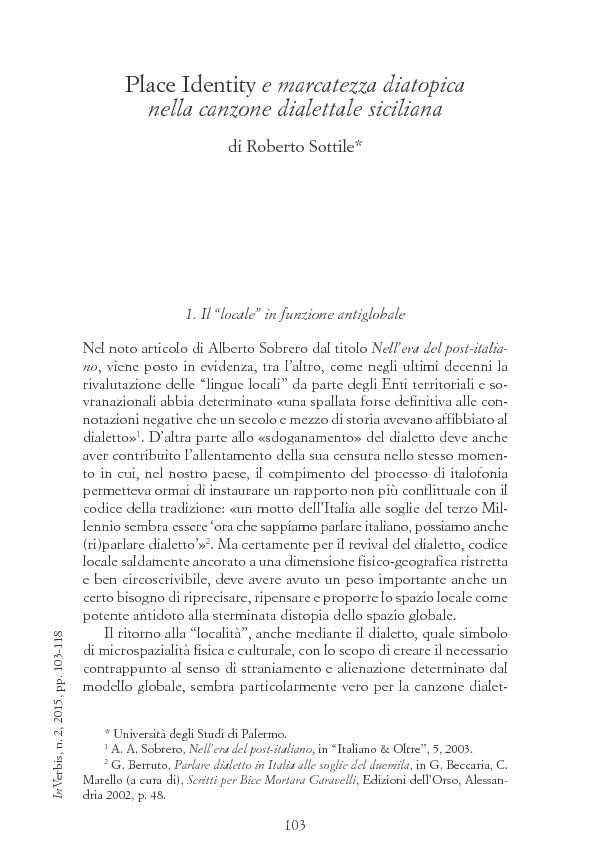