The author discusses the nature of the dialect written and spoken by the Neapolitan singer Pino Daniele (1955-2015), which started, at the end of the Seventies, a very deep transformation of the Neapolitan music, that was mixed, by him and others, like James Senese, in an original combination with blues, jazz and rock. From the linguistic point of view, Daniele seems much more conservative than from the musical one: besides, it is possible to recognize in his texts four elements with a great relevance: 1. despite of the high number of monolingual, bilingual (Neapolitan and Italian, Neapolitan and American English) or trilingual songs (Italian, Neapolitan and American English), the features of his dialect don't change so evidently; 2. this dialect is often "archaic", that means very close to the traditional one, spoken during his childhood in the very centre of Naples (that was more similar to a big village than to a modern town); 3. this same dialect shows, as usual in the region, a great variability, that we can explain in different ways, with the help of dialectology and sociolinguistics; 4. a lot of texts have not a real, concrete meaning, but they are rather interesting examples of "nonsense": the most important thing is the "sound" of the different sentences. "I am speaking American just because I am joking", says Pino Daniele in the song Ferryboat: in the author's opinion, this was probably true. 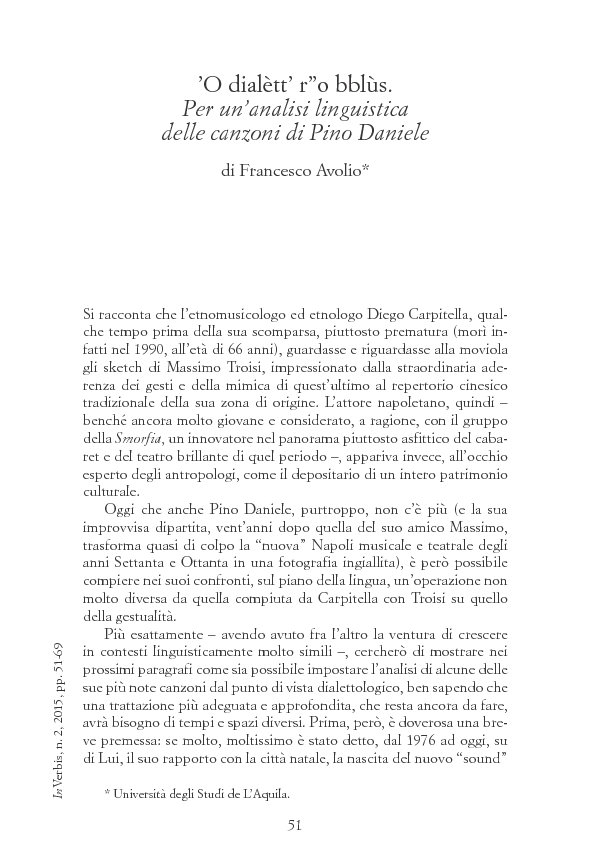