The aim of this paper is to investigate the space-time mapping of the future in Homeric Greek. It is widely accepted that the spatial adverbs πρόσσω 'in front' and ὀπίσσω 'behind' in the Homeric poems are used to portray temporal events located in a sequence of aligned entities that follow one after the other on the same path (Dunkel, 1983, p. 66). In such a temporal sequence, or Time-rp model, those adverbs are associated respectively to past and future events in a bipartite spatial representation of time, without involving a deictic ego-experiencer. After analyzing data from the Homeric poems in a cognitive linguistic perspective, it is found that some temporal uses of the preposition πρό 'in front' also refer to a space-time mapping in which the observer appears to be "in-tandem" aligned with temporal entities that are still related to each other in a deictically neutral "field-based" frame of reference (Moore, 2011). More in detail, in the classic passage of "Iliad" i, 70, the prophet Calchas imposes his vantage point to the sequence of occurring events which he is aligned with, mapping the future events (τὰ τ'ἐσσόμενα) as being located in front (πρό) of the present (τὰ τ'ἐόντα). In this peculiar Time-rp construal, which is also attested in non- Indo-European languages, the future is the farther event that is statically seen in front of the present, thus contrasting to the more common Time-rp construal in which a later event is said to be after another event. Furthermore, Homeric Greek πρό 'in front' is related to a representation of the future that is common not only to ancient Indo-European languages, like Old Avestan, but also to non-Indo-European languages, in which the future is conceptualized as made of a hendiadyc structure, consisting of both distant future and imminent future events. 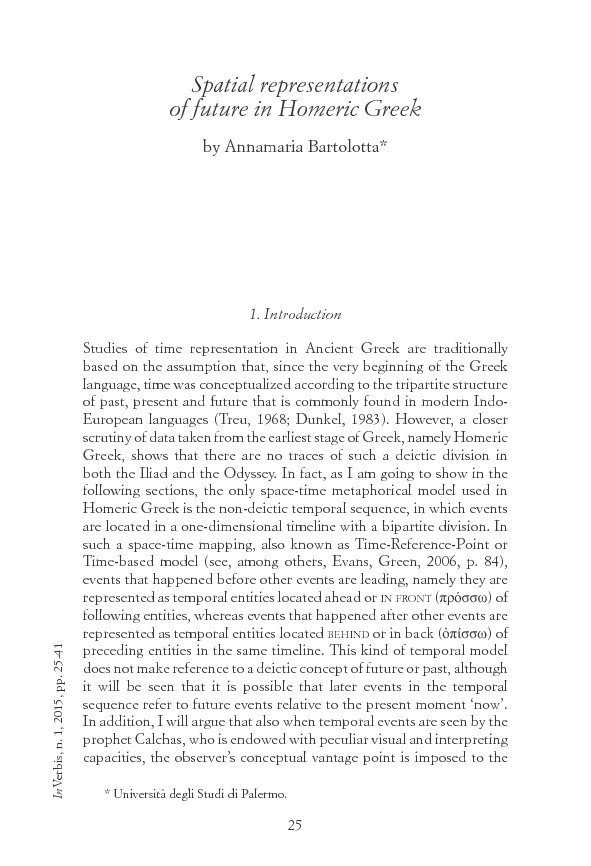