A lover's discours, with its dramatic affective nuances, romantic and irrational, is the "leit-motiv" of the whole François Truffaut's filmography. The Nouvelle Vague, of which Truffaut's movies are expression, translates into movementimage a "love phenomenology", cheerfully, ironic and fatal, for which, as in the best tragic tradition, sometimes you die. The present close examination is exactly focused on this last implication of the amorous passion as an inescapable and fulfilled destiny, expressed through the analysis of the Truffaut's "mélo". This is based on the topic of the love, seen as obsession, or rather on the fatal encounter between Eros and Thanatos, death impulse this last, which generally found in auteur cinematography the tensive epicentre of the female figure. Therefore this report makes references to "Jules et Jim" (1961), adapted from the Henri-Pierre Roché's novel, that is an ode to life and death too, tuned/sung by a sentimental triangle as insolvent as intellectually exciting, consecrated to its tragic and conscious end. Then it talks about "L'Histoire d'Adèle H" (1975), inspired by the tragic cases of the Victor Hugo's daughter, that is played on the "amour fou" poetics, the same that had agitated Oedipus in his dark deep end owing to his exorbitant desire of affective recognition. Another magnificent drama is "La femme d'à coté" (1981), focused on the quiet madness of a totalizing and suicide pain. And one more time La Sirène du Mississipi (1969), which starts with a wedding and goes on as an initiation tale between two lovers. In this part of the filmography the death takes on the unexpected depth of seduction, in other words the diverted and lured sign: thus the Truffaut's characters come true their unavoidable destiny and, running from the death, waste their breath reaching it, in a fatal enchantment that preserves the case's lightness. 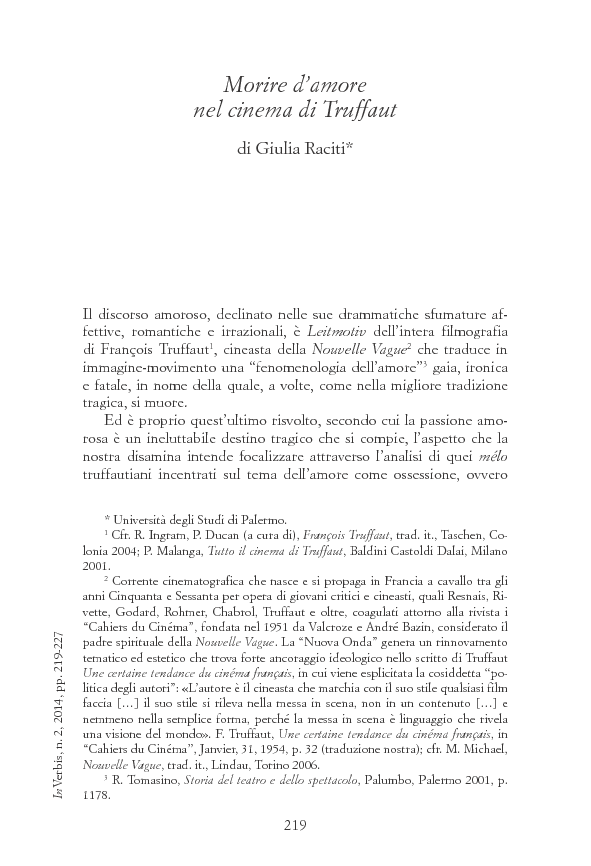