Bernardino Stefonio (1560-1620) is one of the greatest dramatists of the Society of Jesus. He is best remembered as the author of two tragedies, "Crispus" (1597) and "Flavia" (1600), both set in ancient Rome. Jesuit theater originated in colleges founded by the Society of Jesus around the world; it has a pedagogical and edifyng value. The repertoire consisted primarily of Biblical tragedies in Latin. At the end of 16th century, his structural elements became more specific and consolidated according to classical theater. "Crispus" represents a great innovation in the development of Jesuit theater and in the history of drama, too. It is the first "tragoedia Christiana" and show an historical event: the death of Giulius Flavius Crispus, Costantino's son. He was charged by his stepmother whith an adultery. "Giulius Crispus" was a Christian and was guiltless: Stefonio uses his death as an edifyng example. His former disciple Tarquinio Galluzzi in his erudite work, "Rinovazione dell'antica tragedia" e "Difesa del Crispo" (1633), highlighted the most important aspects of "Crispus", addressing a crucial question: is the «rinovazione dell'antica tragedia» possible? As well as, in simple terms: can a dramatist write a Christian tragedy? The purpose of this article is to try to answer this question. 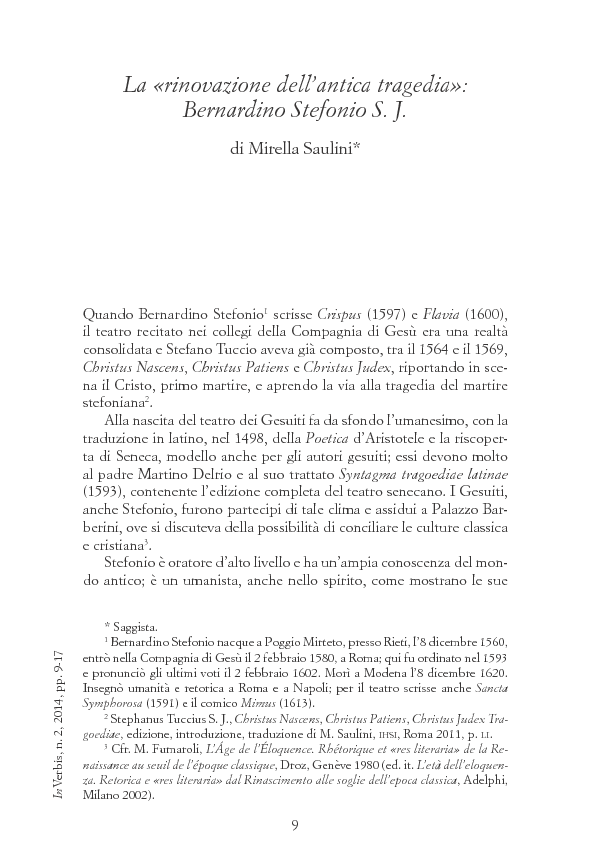