To understand the way in which social media have influenced the transformation of protest and politics it is important to get to grips with the spatial and organisational transformation of forms of mobilisation that has been facilitated by the diffusion of new platforms and apps. To this end in this article I will reflect on and expand the concept of choreography of assembly introduced in my first book Tweets and the Streets, as a means to capture the way in which social media concur in the process of creation of events, and the construction of the space of mobilisation. I will argue that the new forms of action that are associated with social media and in particular the format of the flash mob, involve the idea of the protest event as a moment of assembly of individuals that are otherwise socially and spatially dispersed. In this context, the construction of the event is not just a manifestation of the protest movement that exists in other forms but something more radical: the precipitation of an online crowd into a physical gathering. This precipitation is filtered through a number of operations, such as the fixing of specific times and places where it is due to occur, the present of various instructions that are meant to guide the process of gathering and finally the narratives and symbols that accompany this process. Movement leaders in this context appear in the form of choreographers, namely as «namers», «placers» and «programmers» of a movement which while relying on the collaboration of manifold individuals is nevertheless stamped with the initial instructions, the «concept» that has been established by the initial group of creators. This view of protest as the result of a process of social media construction can help us better understand what happens in the genetic phase of a social movement and appreciate the importance of the moment of concept-development and design of the movement performance, thus overcoming the usual opposition between organisation and spontaneity and showing how rather the two act in concert. 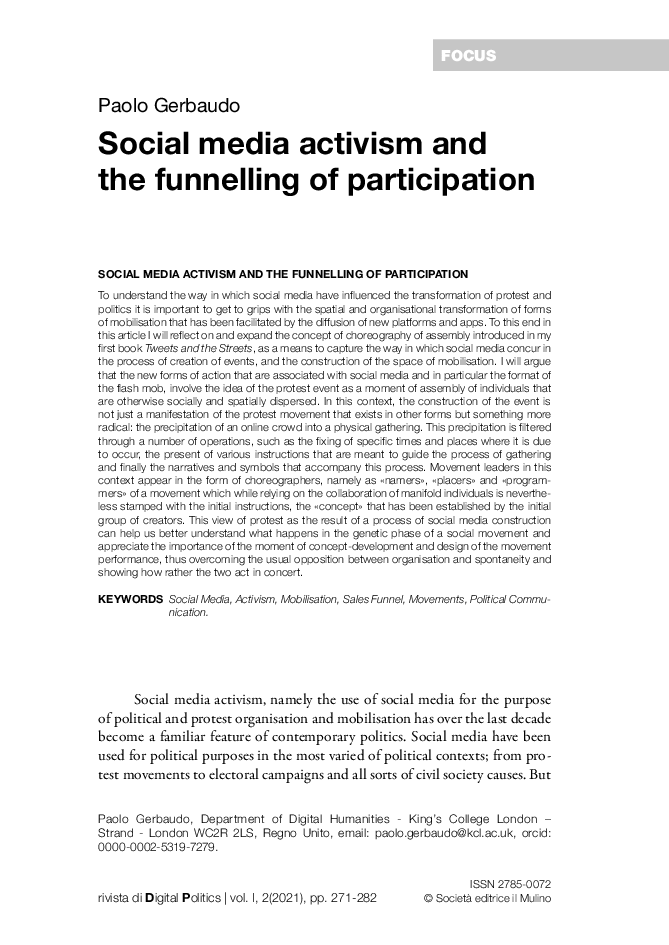