The weakening of traditional parties and of their territorial rooting which has occurred over the last decades has brought back the scholarly interest on the local dynamics, namely, on the social and political transformations involving local areas. An increasing number of scholars has therefore focused on the «peripheries», those urban areas that are traditionally associated with a high level of socio-economic distress, wherein inhabitants feel themselves as economically disadvantaged, socially marginalized and politically excluded. This paper is part of such research strand by investigating the variation in the electoral results in three Italian cities – Bologna, Florence, and Rome – in relation to the spatial distance from the urban centre and to the socio-economic distress. More notably, the paper answers two main questions: a) are the most distant areas from the historical centre also those with a higher level of socio-economic distress? b) what kind of relationship is there between voting and socio-economic distress, and how does such relation change over the post-crisis years? To answer these questions, we consider the results of four elections (parliamentary elections 2008, 2013, 2018; European elections 2019) in the three cities investigated, which are similarly characterized by an electoral decline of the Pd (but also of the Pdl/FI) to the benefit of M5s and League (and in part also of FdI), besides being located in central Italy. By using an original dataset combining socio-economic and electoral variables at the district level, the article analyzes the variation in the electoral support for the main Italian political parties, with a particular focus on both mainstream (Pd and Pdl/FI) and antiestablishment parties (M5s and League). 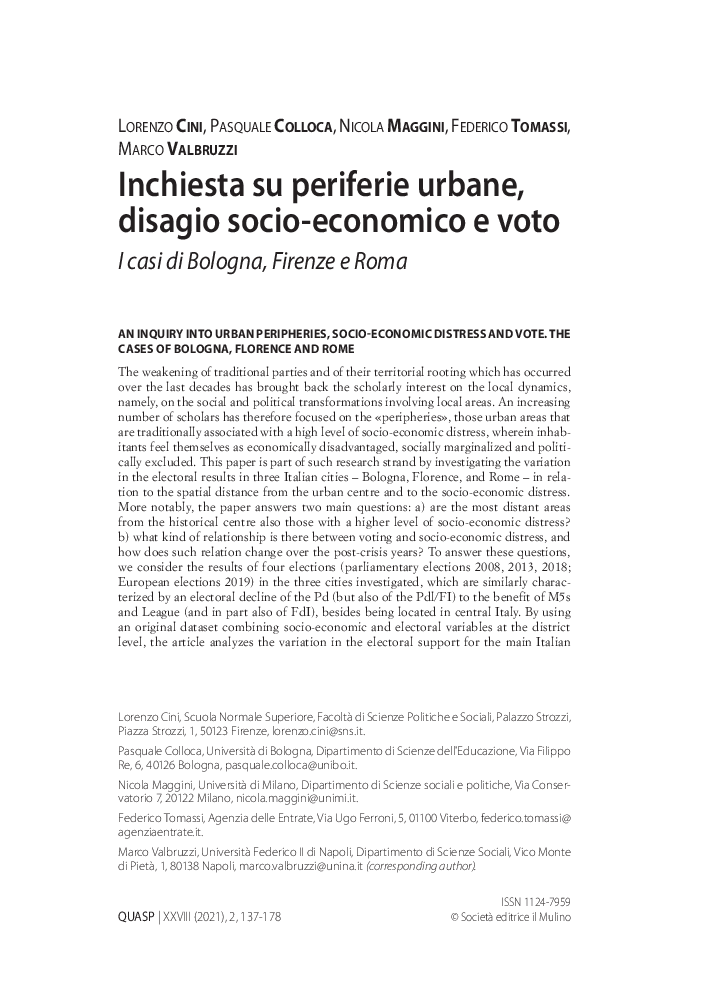