One hundred thousand years ago at least six species of humans inhabited the Earth. They were insignificant animals whose impact on the planet was comparable to that of gorillas, fireflies and jellyfishes. Then, about 70,000 years ago, things changed because of Homo sapiens’ «cognitive revolution». Today, Homo sapiens is both the only existing human species and the lord of the Planet. According to Harari, the secret of this success is imagination. Homo sapiens are the only animals who can talk about things which only exists in their imagination: gods, nations, laws, money. Thanks to this ability, as Harari argues, Sapiens partnered to create communities, cities, kingdoms, and empires. They built trust in money, books and laws. And they found themselves enslaved by political systems, bureaucracy, consumerism, and by the pursuit of happiness. In Homo deus Harari describes this journey from its beginnings to today’s age of «triumphant humanism», culminating in the digital revolution. And he also suggests some possible stages of our future history. According to his conjectures, Homo sapiens might evolve in a new species, «Homo deus», which in turn might be quickly replaced. Harari leaves us with an unsettling question: will digital revolution lead humans to become useless, fostering a digital dictatorship which will only prelude to the rise of a new robotic society? 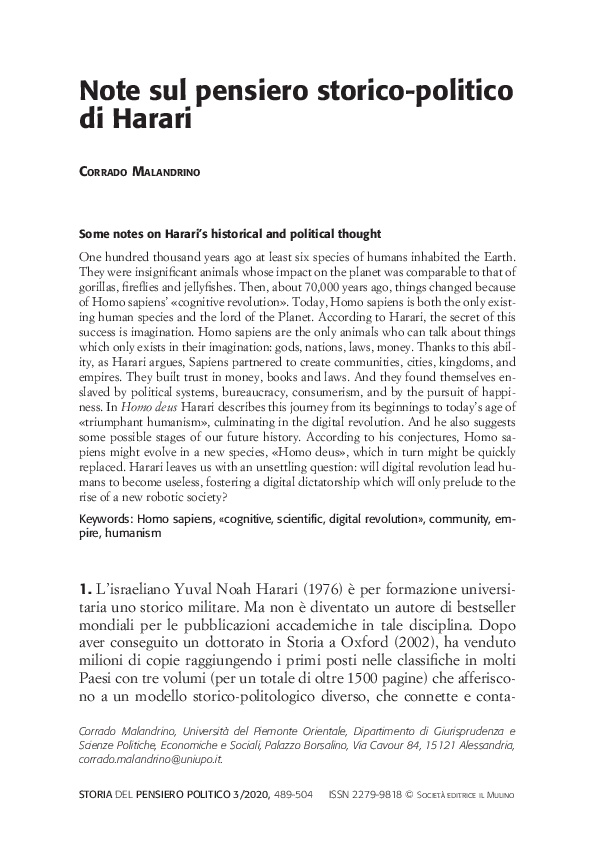