Many contemporary scholars have been concerned with rethinking the fundamental features of the modern republican tradition in order to re-propose it in the current debate on the future of democracy. No place was properly reserved to Alfieri in this literature. Notwithstanding this deficiency, Alfieri definitely belongs to the Italian republican tradition and deserves more attention by historians of political ideas. The article offers some readings of crucial themes within Alfieri’s two major political writings, Della tirannide and Del principe e delle lettere: the conception of liberty not merely intended as a predicate of people actions but as an existential condition against slavery, his contempt for voluntary and courtly servitude as well for people’s shallowness, the rhetoric of virtue and so on. Nonetheless, as the specific and precise objectives of his political writings remain elusive, contrasting interpretations have been emerged over two centuries. The attempt to merge Machiavelli and Montesquieu, the assumption, that social conflict is functional because it sustains checks and balances assuring liberty, mainly explains such dissenting variety. 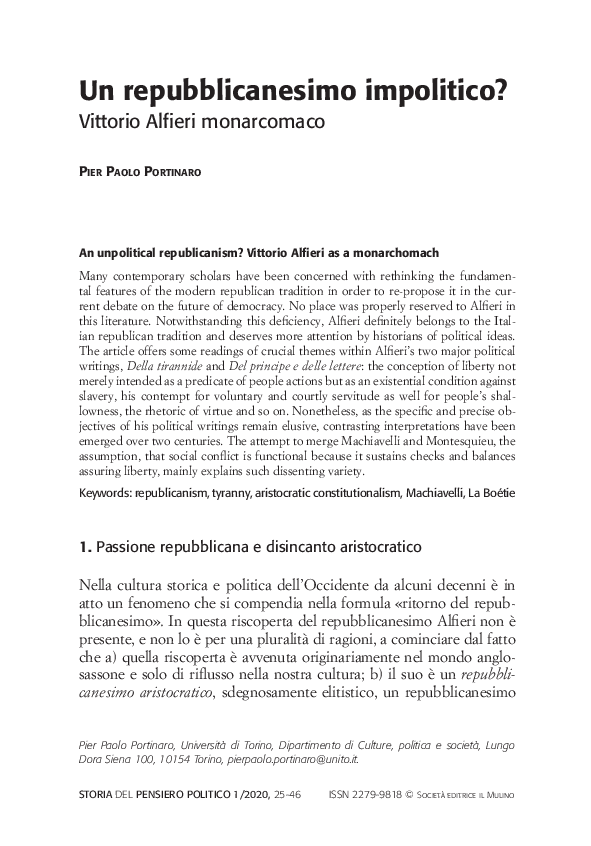