In the 19th century, Eurasia has been the theatre of a Great Game between the Russian empire and the British empire. At the beginning of the 21st century, Eurasia is the «Great Chessboard» on which a "New Great Gam"e is played between Russia and United States. In order to understand the genesis and the perspectives of this "New Great Game", the present essay explores the intricate historiosofic, imagologic and geopolitical controversy between Russia and the West. Great Game has been carried out on three levels: the «dark fight» between the intelligence agencies; the ideological war engaged by the propagandists of the «russophobia» and the «anglophobia»; the war episodes. In the 21st century, the geoeconomical competition for the control of the energetic resources of Eurasia has Russia, the United States, China, India and Iran as protagonists. The "New Great Game" is an imagologic conflict between global democracy, that according to the ideology of Eurasian atlanticism would have to expand in the post-Soviet space through the «coloured revolutions» and «sovereign democracy», and «eurasianism », that is the paradigmatic ideologeme of Russian geopolitical idea for the 21st century. In the context of the "New Great Game", the Ukrainian question is emblematic: the West intends to complete the Orange Revolution of 2004, while Russia supports a kind of counter-revolution to complete the geopolitical project of the Eurasian Union. 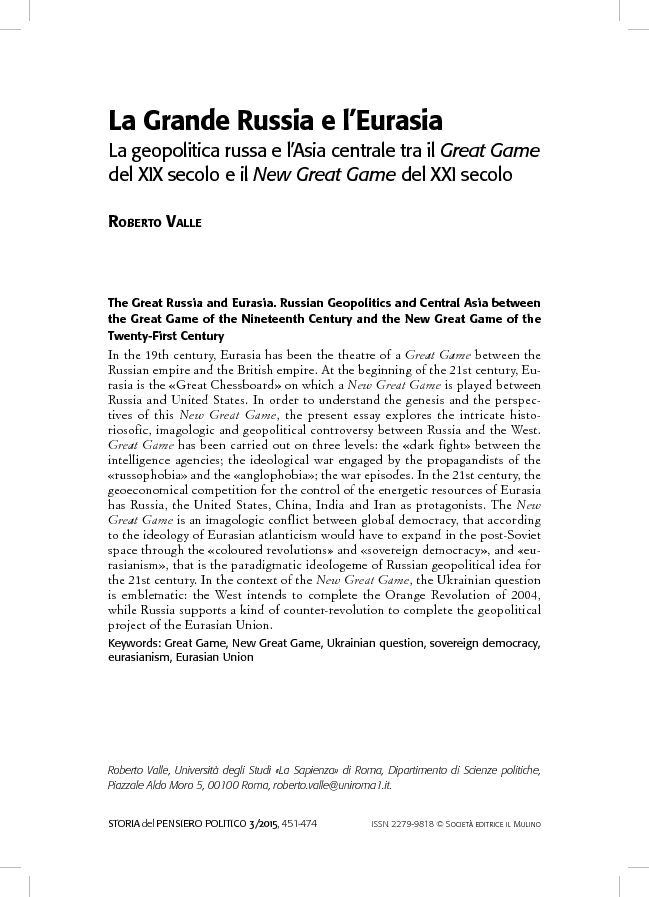