There is a large and established body of scholarly literature that demonstrates the existence of an intellectual relationship between the influential churchman and theologian Jean Gerson and the poet-courtier Christine de Pizan. A series of studies have begun to marshal evidence in support of sustained intellectual ties between the two, culminating in Earl Jeffrey Richard's recent conclusion that their relationship should be classified as "a close intellectual friendship". The present paper examines the substance of the intellectual friendship between Christine and Jean by examining one overlapping theme in their respective corpus: the organic metaphor between the human body and the political community. Both writers had considerable opportunity to deploy the body politic trope in their works, given the fluid and even chaotic nature of the French monarchy in their day and the consequent need to conceptualize political order. In this regard, Christine perhaps deserves the greater credit and attention. She was the only political author of medieval or early modern Europe of whom I am aware who designed an entire bookthe Livres de Corps de Policie (1406)around the theme of the body politic. Gerson's use of the organic metaphor was more diffuse: it shows up in some of his most famous political sermons before the French court, and also in a 1419 letter to the tutor of the Dauphin. The sources on which both relied for the body politic were essentially identical: John of Salisbury's Policraticus, which had been translated into French by Denis Foulechat in 1372; and Nicole Oresme's French-language translation of and commentary on Aristotle's Politics. I propose to examine whether there is any detectable cross-fertilization between Christine's and Gerson's particular uses of the metaphor, or whether instead they were completely separate and independent in their deployment of the analogy. 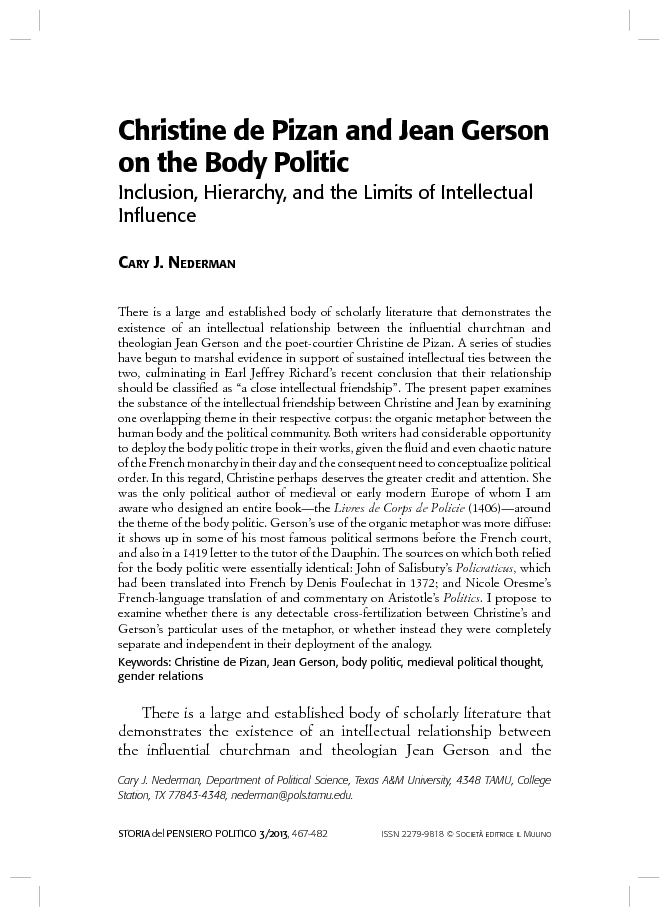